Artistic boxes are being sent all over the country with a message of peace. 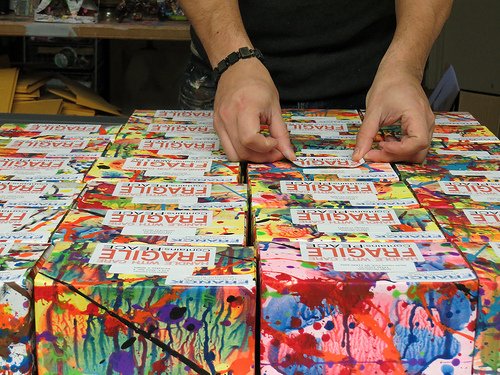 New York, NY - December 12, 2013 - In 2006, De Las Mercedes conceived “The Priority Boxes Art Series”, an ongoing, internationally acclaimed peace project that merges art and activism. Today, “The Peace Boxes” have been sent to 13,000 requested locations, including homes, schools, churches, community organizations, hospitals, universities and libraries around the globe.
Helping to redefine the role of the artist in society, the "Priority Boxes" is a mixture of art and activism. A conceptual art project that continues to engage the public into talking about peace, while challenging people to reconsider their ability to influence change. With labels that read "Fragile Contains: Peace, Love or Hope", visual artist Franck de Las Mercedes sends abstractly painted, seemingly empty boxes to anybody, anywhere in the world. The boxes are sent free inside the continental United States, and for the cost of shipping internationally, to convey that something of such priority as peace should not have a price and that art can be both inclusive and accessible.
In recent years, The Priority Boxes Art Project has evolved into a pop culture and educational movement around the world - with students and educators making their own boxes and sharing the art and message with peers, loved ones and their community. In addition to being taught in classrooms, they’ve been exhibited in galleries, museums, living rooms and on the iconic LED screens of Times Square, NYC.
Franck de Las Mercedes' multi-genre art combines expressionism, photography and collage to illustrate how he sees the world around him. In this quest for self-expression, the artist found himself questioning the role of the artist in society and exploring ways to bring contemporary art to a broader audience, offering people everywhere experiences with art by bringing it to their personal environment.
Franck’s work has been exhibited in numerous shows around the world. In 2012, his portrait of Francisco de Quevedo was acquired by Fundación Francisco de Quevedo for their permanent collection in Ciudad Real, Spain. He’s also been featured on numerous national and international television shows and prestigious publications, including CNN En Español, LatiNation, Univision's "Aqui y Ahora”, Selecciones (Reader's Digest), Art Business News, Hispanic Magazine, Museum VIEWS, American Style and was most recently Blick Art Materials’ Spring 2013 Featured Artist. Born in Masaya, Nicaragua, Franck was raised in New York City after emigrating to the U.S. in 1985. He currently works and resides in the New York metropolitan area.
For more information: http://peaceboxes.com/