Summer Britcher rode the momentum from a bronze medal on one home track, to a gold medal on another Friday night as USA Luge placed 1-2 in a Viessmann World Cup women’s singles race in ... 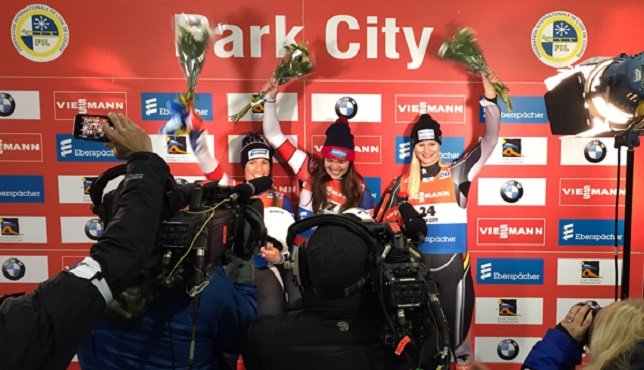 Park City, UT - December 12, 2015 - Summer Britcher rode the momentum from a bronze medal on one home track, to a gold medal on another Friday night as USA Luge placed 1-2 in a Viessmann World Cup women’s singles race in Park City, Utah.

In the two races, the 21 year old has captured her first World Cup medal, followed by her first career victory.

“A lot of athletes are really close in training,” said Britcher. “So it’s sort of a toss up as to how things would go. But I was trying to stay calm and not let last week get in my head, and not expect anything out of this more than some good runs.”

In the past two weeks, the American women, with five medals, are capitalizing on the rarest of occasions – two home races coming on consecutive weeks.

“Part of it, you can’t deny, is two home tracks in a row,” continued Britcher. “It’s not an advantage we get ever. A lot of it is my strength training. I think as I’m getting older it’s getting easier to get stronger and faster on the start.”

Erin Hamlin, last week’s winner in Lake Placid, collected the silver medal, 0.07 of a second behind her teammate. Germany’s Dajana Eitberger, the opening day gold medalist in Igls, Austria, rallied from fourth place to third in the second heat.

“I’ve never had a real solid race here,” stated Hamlin. “The first run was a little sketchy. My runs weren’t as dynamite as I would have liked. But for racing here, it’s my best ever so I’m pumped. And to go 1-2 it’s awesome. This is why we love racing in North America.”

The Americans were agonizingly close to their second straight medal sweep, as Emily Sweeney, a silver medalist last weekend, took fifth, a scant 0.01 from the bronze medal.

“It was kind of disappointing for me,” said Sweeney, the 2013 Junior World Champion on this layout. “In the first run I gave myself too much of a deficit to come back from. I wasn’t sliding confidently. I put my feet down three times….it was kind of tough. I would’ve loved to have been up there on the podium with them. The speed is there. I just have to pull it together.”

Britcher, a 2014 Olympian from Glen Rock, Pa., had the two fastest heats on the 2002 Olympic track. She grabbed the opening leg advantage in 43.825 seconds. In what must have seemed like an eternity between heats, Britcher backed it up with a final run of 43.712 on a night that saw temperatures fall and the 12-curve women’s and doubles track quicken.

The gold medalist totaled 1 minute, 27.537 seconds. Hamlin of Remsen, N.Y., racing with the Viessmann World Cup leader’s bib, chased Britcher doggedly in both legs. The Sochi Olympic bronze medal winner was third at the intermission with Canadian Alex Gough ahead of her. But Gough, who skipped last week’s World Cup race in Lake Placid due to her university commitments, uncharacteristically faltered in the finale, vacating the podium.

Hamlin’s two-run total of 1:27.614 gave her the silver and kept her in first place in the overall World Cup rankings with 231 points. The victory moved Britcher to second on the season with 225 points. USA Luge has never had singles racers occupy the top two rungs on the World Cup ladder. 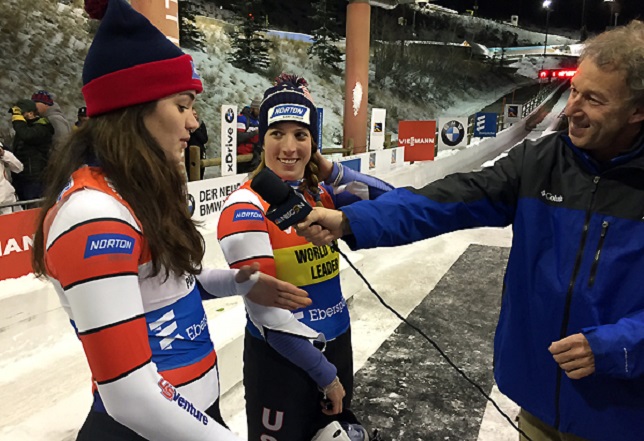 Her teammate and Olympic gold and bronze medalist, Natalie Geisenberger, has been the dominant luge racer since the Vancouver Winter Games. Yet she has just one podium result in the three Viessmann World Cup starts to date.

Sweeney, of Suffield, Conn., is fifth with 190 points. The team’s fourth member is the tenacious Raychel Germaine, the Nations Cup qualifying winner 24 hours earlier. The Roswell, Ga. athlete, in her first season of World Cup racing, placed ninth in 1:27.938, and is in 10th place with 105 points.

“The first run was okay, but the second run was awesome,” said Germaine. “It was the best run I’ve ever had here. I was really happy with it and I’m glad to end on it.”

Germaine had the fifth fastest final run, and has progressed so quickly in the opening three weeks that she is now exempt from qualifying next week in Calgary.

In addition, her two top nine results in the past two weeks, qualifies the 20 year old for the 2016 World Championships.

“These guys are young but they got on the senior circuit younger than girls in the past,” remarked Hamlin. “It’s just getting that experience. Summer moved up at the same time I did when I was her age so it was cool to see that. And with Emily, Summer and Raychel coming on, we’re all working really hard. They’ve definitely put a lot of time in and have really stepped up. We push each other every day. It’s exciting.”

Matt Mortensen and Jayson Terdiman led three doubles sleds into the top 15 for the United States and subsequently into Saturday night’s sprint race.

“It was an interesting training week,” said Mortensen. “The track started out pretty soft. It was warm. There were a lot of different (sled) set-ups going on.”

However that process ended at the time of Thursday’s final training run as heavy snow fell in the Wasatch. Mortensen and Terdiman, as a result, opted to forego the session.

“We were going to try a different set up,” continued Mortensen. “But we reverted back to what we were training on because the track slowed down so much. So we stuck with the setup that was working, although it would have been interesting to see what the new one would have done.”

Mortensen of Huntington Station, N.Y. and Terdiman of Berwick, Pa. were seventh, ahead of Justin Krewson of Eastport, N.Y. and Andrew Sherk of Fort Washington, Pa., in eighth place.

“It was by far the cleanest race we’ve had so I have no complaints,” said Krewson, in just his third race with Sherk.

“It was a great race. It’s definitely the closest race I’ve been in, time-wise,” added Sherk. “We had two great runs so no complaints.”

Jake Hyrns of Muskegon, Mich. with Anthony Espinoza of Park City took 12th. It was Espinoza’s third career World Cup and first on his home course.

“It feels good to be back in Park City,” exclaimed. “This is my hometown. I’m in my element while I’m here. My family and friends are here supporting us so it feels really good to be racing back home.”

“For me I think the race went great,” said Hyrns. “Especially coming from training during the week, we had some issues here and there. But we laid it down during the race so I’m happy with it. We are 100 percent getting more comfortable on the sled. Everything is coming together.”

Eggert and Benecken clocked 1:27.567, with Austrians Peter Penz and Georg Fischler, despite a near disaster coming down the start ramp, third in 1:27.679. Penz and Fischler had just the 10th best time of the final heat.

Despite the victory by Wendl and Arlt, Eggert and Benecken remain atop the overall World Cup standings, with 285 points. Penz and Fischler are second at 240 points. Wendl and Arlt are third with 212 points.

Mortensen, serenaded by American fans on the occasion of his 30th birthday, and Terdiman finished 0.17 of a second from the podium. Their two runs totaled 1:27.848.

“Today’s race was very exciting, very close,” stated Terdiman. “The first run wasn’t as solid as we’d like to have. It was a little bit sloppy at the bottom of the track, and at the start I was not as fast as Matt was on the paddles. But we really cleaned up the second run. It was a stellar run, the best we had all week.”

The result elevated the U.S. entry to fifth in the overall standings with 134 points, their highest since they became a team prior to last winter.

Krewson and Sherk were another 0.02 behind their teammates, while Hyrns and Espinoza punched in with 1:28.326. The former sled is in ninth place with 116 points in their first year together. Hyrns and Espinoza, also in their debut season, are tied for 13th with 91 points.

Saturday’s World Cup racing begins at 5:30 PM EST with men’s singles, to be followed by the “flying start” concept of the one-heat Viessman Sprint World Cup presented by BMW. The second year event features just the top 15 sleds in each discipline from the earlier weekend races.

The competitions will be streamed live on www.usaluge.org. Coverage of Friday’s races will be included Thursday night, Dec. 17, at 7 PM EST on NBC Sports Network.