View the Northern Cross Star Pattern in the Night Sky

Spot this symbol of Christmas as it turns upright this month. 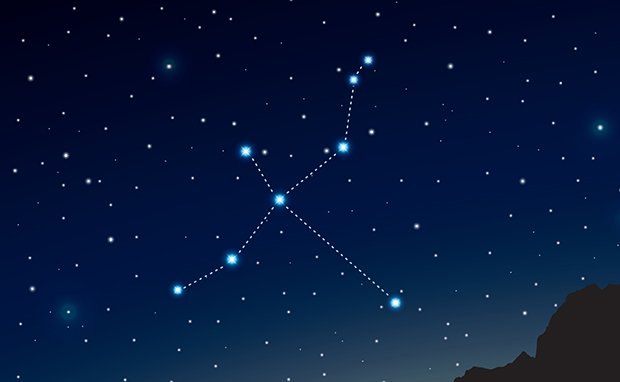 This winter is offering stargazers plenty to look at, especially as we close in toward Christmas. The heavens are putting together quite a celestial display, sort of an astronomical play dedicated to the season.

First there was the possibility of an aurora as an active solar storm spat out charged particles at the earth, the same ingredients that produce the well-known and spectacular Northern Lights. Also, the closest conjunction of Saturn and Jupiter in hundreds of years occurs on December 21, combining to produce a brilliant “Christmas Star” for the winter solstice.

But, before that, skywatchers can look to the west-northwest to see the Northern Cross stand up on end, a symbol of the celebration of the Christmas season.

The arrangement of stars is not really a constellation; it is known as a asterism, a grouping of stars that isn’t an officially named pattern. Not as popularly known as its southern sister, the Northern Cross is composed of the six brightest stars in the constellation Cygnus the Swan. (It is also much larger than the Southern Cross, also considered an asterism and not a constellation.)

In December, the Northern Cross orients itself upright so that Deneb, the brightest star in the cross is at the top. The rest of the shape is made up of the stars Aljanah, Delta Cygni, Sadr, and Albireo.

According to earthsky.org, the Northern Cross is usually associated with summer viewing but the website says that it is best oriented for viewing now.

“It appears to stand majestically upright on the northwest horizon at around 8:30pm local time, forming an appropriate Christmas symbol,” the website says.

The Northern Cross is high in the sky after sunset, sinking down to the horizon over the course of the night.