Two pit bulls were left outside in the cold backyard of Sharon Martinez’s home. 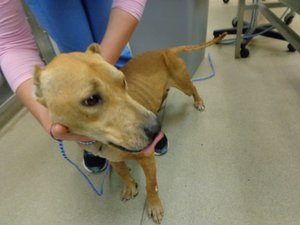 Today a woman in Deer Park was issued a citation for neglecting her pit bulls. The dogs were found after a neighbor called police complaining about them being left out in the cold, snowy weather.
Suffolk County Police Officer James Johnson arrived on the scene of the Lincoln Avenue home on December 8th and found the two pit bulls, Nina and Papa, left outside in the backyard. Officer Johnson found the dogs emaciated. Another officer, John Collins of the Suffolk County SPCA, arrived to provide aid for the two pets.
Officer Johnson took the dogs to the Veterinary Medical Center of Long Island in West Islip. An examination by veterinarians found the dogs were severely neglected by their owner Sharon Martinez. The 55-year-old Deer Park resident was issued a Field Appearance Ticket this morning for Severe Animal Neglect under the New York State Agriculture and Markets Law.
Martinez is set to appear in court on a later date. Her pit bulls are currently at the Town of Babylon Animal Shelter.
A similar incident with neglected pit bulls took place at the end of November in Nassau County. On November 7th the NCPD DA Squad and the NCDA ACU arrived at a home in Roosevelt where several pit bulls were found with blistered skin, bloody raw open sores, cracked paws, and severe swelling to their face and eyes. Veterinary examinations found they had advanced stages of mange that went untreated for months. The pit bulls were put under the care of the North Shore Animal League after being saved.
Their owner, 41-year-old Shawn Christopher, was arraigned on three counts of Criminal Animal Neglect, and one count of Criminal Possession of Marijuana the Fourth Degree. He is due back in court on January 16th and the maximum sentence for each count is up to one year in jail.
[Source: Suffolk County Police Department]