Dozens of allegations related to staff abuses, patient neglect, sexual assaults and even patient deaths have been reported over the last few years, Zeldin says. 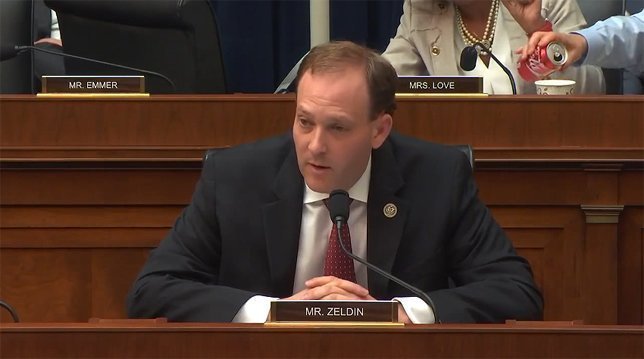 Patchogue, NY - December 10, 2018 - Today, Congressman Lee Zeldin (R, NY-1) was joined by Reps. Peter King (R, NY-2), Elise Stefanik (R, NY-21) and Tom Reed (R, NY-23) requesting that the Department of Justice investigate the New York State Justice Center for the Protection of People with Special Needs’ failure to protect individuals with disabilities and Medicaid recipients who have died under state care, including nine who died while in state care in Suffolk County since 2013.
Dozens of allegations related to staff abuses, patient neglect, sexual assaults and even patient deaths have been reported over the last few years, yet the New York State Justice Center, which is authorized to investigate all reports of abuse and neglect, pursue administrative sanctions against staff found responsible for misconduct, and prosecute criminal offenses through its Special Prosecutor/Inspector General sharing jurisdiction with local district attorneys, has consistently failed to perform these responsibilities and continues to operate without any added oversight or scrutiny. Since its inception in 2013, the Center has failed to take meaningful steps to address systematic failures, and as such, it is critical the Department of Justice investigate.
“Individuals with disabilities deserve full and equal protection under the law. However, in the State of New York, abuses have been ignored and swept under the rug due to the lack of action taken by the New York State Justice Center for the Protection of People with Special Needs,” said Congressman Lee Zeldin. “It is unacceptable that the State of New York continues to pocket billions of federal tax dollars to care for these patients while neglecting to investigate suspicious deaths of patients that happen in their very facilities, and it is clear the State of New York refuses to hold itself accountable. It is critical that there is a thorough investigation to finally secure justice for individuals with disabilities who have died in state care as a result of criminal misconduct.”
President of the Jonathan Carey Foundation Michael Carey said, “The NYS Justice Center is ensuring that staggering numbers of sexual assault crimes and deaths of children and adults with disabilities are covered-up internally and never prosecuted. This corrupt agency is not protecting people with special needs, but instead obstructing justice by purposefully keeping most reported crimes from the local police and county district attorneys. Federal authorities must intervene swiftly to stop the criminal cover-ups and to end the wide-scale discrimination in which the disabled are denied their 14th Amendment right to ‘equal protection of laws.’ The Justice Center must be stopped, it is directly involved in a massive Medicaid fraud scheme by protecting dangerous facilities that are misappropriating massive amounts of federal tax dollars.”
The Jirak Family, whose son died in state-care in Suffolk County in 2015 said, “The investigation of the NY State Justice Center for the ‘Protection’ of People with Special Needs must commence immediately. Our most vulnerable citizens are not receiving the due process they are guaranteed by law, and without immediate action, needless abuse and further deaths will continue.”
A signed PDF of the letter is available here.