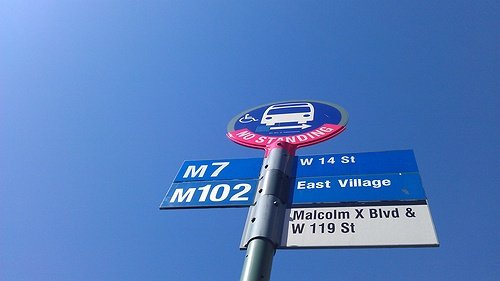 The new video campaign extends the MTA’s ongoing safety initiative to improve bus safety for anyone riding, walking or cycling near MTA buses and works in conjunction with New York City’s “Vision Zero” program to eliminate traffic fatalities. The MTA has recorded 14% fewer bus collisions involving pedestrians this year, down from the same period a year earlier, and 6% fewer collisions involving bicyclists.

The 30-second public service announcements are part of the MTA’s three-pronged approach to improving bus safety. In addition to raising public awareness of safety issues involving buses, the MTA is testing technology to reduce the likelihood of collisions with pedestrians, cyclists and vehicles, and is also enhancing training for bus operators.

“The PSAs fit within the city’s ‘Vision Zero’ safety initiative. We want to work with our customers and our fellow New Yorkers to make the city’s streets and roads safer,” said NYC Transit President Carmen Bianco. “It only takes a few seconds of distraction for a situation to turn tragic. We strive to always improve bus safety, and this campaign helps emphasize the cooperative effort necessary to reach that goal.”

The new announcements echo the message from an MTA’s print campaign that launched earlier in 2014 featuring slogans such as “Watch out – don’t tune out!” reminding customers to stay alert while using electronic devices. That campaign included a bus safety brochure in six languages, three posters, and safety messages displayed on the rear of bus seats.

The new PSAs, which will air on local broadcast television stations in both English and Spanish, bring the print campaign to life by demonstrating the dangers of walking or cycling while distracted near a bus. They remind users of electronic devices that it only takes a second of inattention for a pedestrian or cyclist to come in contact with a bus.

“In today’s fast-paced electronic world, it is easy to become distracted. While our bus operator training and refresher efforts stress watching out for the actions of others, our new video campaign reminds us all to be mindful of our surroundings and move safely,” said Darryl Irick, Senior Vice President, NYC Transit Department of Buses and President of MTA Bus.

In addition to educating its customers through the print and video campaign, the MTA is also improving bus safety by rolling out two proof of concept programs in 2015. One is a pedestrian warning system that will sound an external audio warning when a bus is making a turn. The other proof of concept program is a collision avoidance system that will use multiple on-board sensors such as radar to detect vehicles, pedestrians and cyclists and proactively warn and alert the bus operator of a potentially dangerous situation.

These programs add to the technology already used by the MTA for safe bus operations such as bus-mounted cameras that help with accident investigations. Cameras have been installed on more than 1,600 buses. Also, every new bus that is purchased is delivered with cameras pre-installed. The MTA also increased its collaboration with the New York City Department of Transportation on traffic engineering and streetscaping issues to eliminate potential safety risks on roadways.

As part of its commitment to safety, the MTA has implemented an enhanced communications and training strategy for bus operators. NYC Transit has a new training program to sharpen the focus of bus operators with good driving records, which builds on the annual safety training all operators attend as well as any additional remedial training. The MTA is also working with its labor unions to improve its response when operators are involved in pedestrian or cyclist collisions.

MTA managers are also conducting more observational rides. Managers are conducting random rides as well as riding with operators who have been involved in collisions. Managers engage operators on safety issues on the road and at the depot to promote safety and get effective feedback. Visual safety reminders and safe driving tips are also posted throughout bus depots.

Below are the new public service announcements.