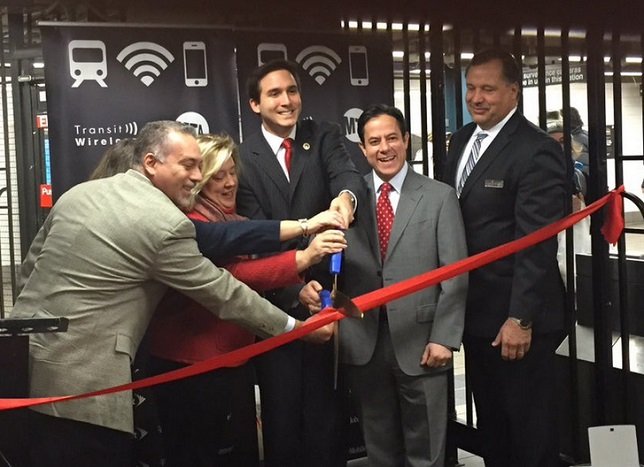 Celebrating the launch of cellular and free Wi-Fi service at the 86th Street subway station.

“Subway delays making you late to a meeting with no way to tell anyone, was a part of being a subway rider, but now you’ll be able to get in touch and get work done,” said Council Member Ben Kallos who has been advocating for this expansion in City Council hearings. “A connected commute is about to become a reality for nearly 200 million subway riders on the East Side. Thank you to the MTA and Transit Wireless for their partnership in bringing the Internet to any subway rider with a smartphone.”

To date, Transit Wireless has connected 146 underground MTA stations in Manhattan, Queens and the Bronx.  The company is on track to connect all 279 underground stations by 2017, one year ahead of schedule.

“The wireless infrastructure that Transit Wireless is building goes beyond the convenience of making a cellphone call or accessing the Internet from a station platform, the technology supports public safety through the ability to make E911 calls and access assistance from Help Point Intercoms,” said William A. Bayne, CEO of Transit Wireless. “We are working closely with our carrier partners AT&T, Verizon Wireless, Sprint and T-Mobile to bring New Yorkers underground connectivity.”

"When your smart phone doesn't work on the subway, neither can you," said Council Member Dan Garodnick. "Bringing Wi-Fi and cell service to underground stations helps commuters stay a little more connected and adds value to our transit system for those who rely on it every day."

“Robust free Wi-Fi options are an essential part of creating a more connected city,” said Manhattan Borough President Gale A. Brewer. “As we expand on programs like Transit Wireless and the upcoming LinkNYC program, we must ensure that all neighborhoods have access to these networks. I applaud Transit Wireless for wiring this station ahead of schedule, and hope this program can serve as a model for other telecom campaigns across the City.”

“Wi-Fi is essential to the safety and convenience of our New York City commuters.  With no-cost Wi-Fi in stations throughout New York, commuters are now able to contact someone in emergency situations, research directions and coordinate meeting points,” said Assembly Member Rebecca A. Seawright.  “Having this service available provides a sense of security and comfort to everyday commuters." Congresswoman Carolyn Maloney said, "I am delighted that in the city that never sleeps, we'll soon have a Wi-Fi connection even underground.  You'll be able to send that important text or email from the subway station thanks to the MTA and the Transit Wireless team."

“The subway is the heart of the city's transportation network. From offering ‘last mile’ public transit for outer borough residents to Wi-Fi while underground, Uber is proud to help ensure that more New Yorkers can remain connected while traveling across the city,” said Josh Mohrer, General Manager, Uber NY.

Transit Wireless launched Transit Wireless WiFi in 76 underground stations in Queens and Midtown Manhattan in October 2014. Since the launch of free Wi-Fi underground consumers have used more than 284 terabytes of data spending an average of 11 minutes per session on the network.   A full and up to date list of connected subway stations to date can be viewed here.

Phases 1 through 4 of the Transit Wireless network build-out have brought underground connectivity to 70 million MTA riders monthly in Manhattan, Queens, and now the Bronx. Phase 5 will bring another 37 stations online by mid-2016, including the first stations in Brooklyn. Phases 6 and 7 of the Transit Wireless network build-out will connect 90 remaining Brooklyn and Manhattan underground stations in 2017, a year ahead of schedule.

About Transit Wireless WiFi™
To connect to the complimentary Wi-Fi service, riders can simply select the SSID “TransitWirelessWiFi” and go to their browser before being connected to the Internet. Riders will also be able to browse daily New York City news and events from CityBuzz as they wait in stations. The new Transit Wireless WiFi service allows riders to stay connected for up to an hour before having to log on again.