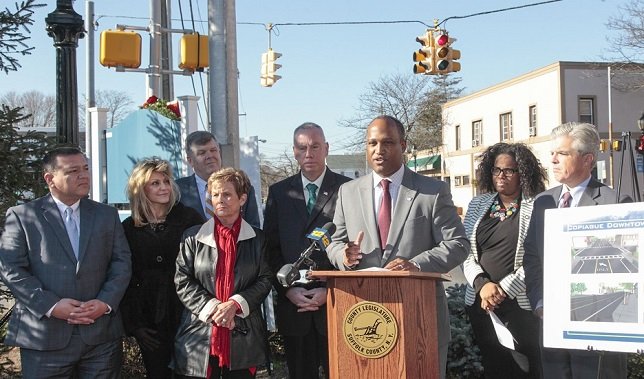 At a press conference on Friday, Dec. 8, two $100,000 grants were awarded to improve the infrastructure of downtown Copiague.

For the past 12 years, the Suffolk County Department of Economic Development has made grant money available for downtown revitalization. This year, a $100,000 grant was awarded to the Copiague Chamber of Commerce by the Suffolk County Legislature for high visibility crosswalks and streetscape improvements. The Town of Babylon will be the lead agency for the project and will facilitate the work.

“Downtown Copiague has the potential to be a true destination for the residents of Suffolk County,” said Presiding Officer Gregory. “Providing an accessible and safe downtown environment is essential to creating the type of communities in which young people want to live and work. None of this would be possible without the hard work and dedication of the Copiague Chamber of Commerce and its President, Sharon Fattoruso. The residents of Copiague and all of Suffolk County are extremely grateful for her efforts.”

“Investing in our downtowns is of paramount importance as we are trying to reverse the brain drain and keep our young people on Long Island,” said County Executive Bellone. “These grants will upgrade the safety of several crosswalks in Copiague and improve walkability in the hamlet, ensuring that pedestrians will be safer and more visible to drivers passing through the downtown areas.”

Additionally, New York State awarded another $100,000 to the Town of Babylon through the Aid to Localities Fund, which makes federal money available to states for community projects. That grant, presented by New York State Assemblywoman Kimberly Jean-Pierre, is marked for streetscaping, parking improvements and façade renovations throughout downtown Copiague.

“On behalf of the Town of Babylon and our Copiague residents, I thank Presiding Officer Gregory and Assemblywoman Jean-Pierre for their advocacy in securing this crucial funding,” said Babylon Town Supervisor Rich Schaffer.  “These grants will go towards upgrading the infrastructure and beautifying the streets of downtown Copiague, critical elements of its revitalization.”

Caption for attached photo: Presiding Officer DuWayne Gregory announces a $100,000 downtown revitalization grant award for infrastructure improvements to downtown Copiague at a press conference on Friday, Dec. 8. An additional $100,000 grant for revitalization efforts was awarded by the state.