PSEG Long Island, through its Commercial Efficiency Program, announced today that it is helping the Long Island Marriott save more than $119,000 per year in electricity costs, solely from the retrofitting of more than 9,800 ... 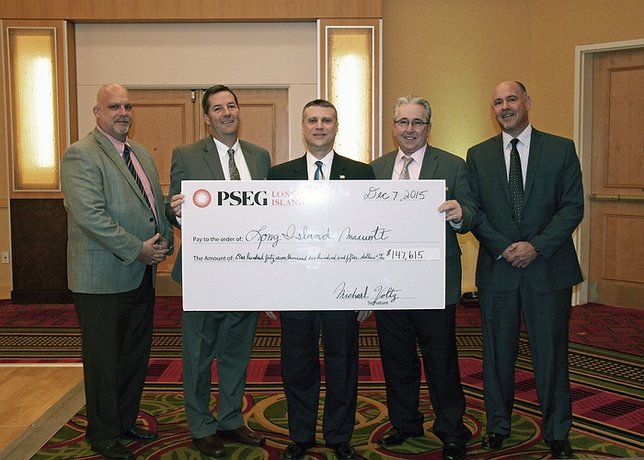 The Long Island Marriott will save more than $119,000 per year in electricity costs - solely from the retrofitting of more than 9,800 inefficient lighting fixtures + lamps to energy-saving LEDs!

Uniondale, NY - December 8, 2015 - PSEG Long Island, through its Commercial Efficiency Program, announced today that it is helping the Long Island Marriott save more than $119,000 per year in electricity costs, solely from the retrofitting of more than 9,800 of the hotels’ inefficient lighting fixtures and lamps to energy-saving LED lighting.

“Carefully assessing energy usage and adopting energy-efficient upgrades is a best practice of leading hotels across the country,” said Michael Voltz, PSEG Long Island’s director of energy efficiency and renewables. “PSEG Long Island and its Commercial Efficiency Program are helping the Long Island Marriott offer guests a sustainable environment while reducing the hotel’s operating costs and freeing up capital that can be directed toward other upgrades that may increase bookings.”

The U.S. Environmental Protection Agency (EPA) indicated in a 2009 study that lighting represents nearly a quarter of all electricity consumed in a typical hotel, not including its effect on cooling loads. The study went on to indicate that lighting retrofits can reduce lighting electricity use by 50 percent or more, depending on the starting point, and cut cooling energy requirements by 10 to 20 percent as well.

The improvements made by the Long Island Marriott will help the hotel cut electric demand by 234 kilowatts (kW) and reduce electric consumption by 794,122 kWh kilowatt hours (kWh) per year. This is the equivalent of reducing 84 cars from the road or 51,771 gallons of gasoline not consumed per year.

“Our Hotel is always looking for ways to improve efficiencies and save costs. The programs offered by PSEG Long Island helps us save now and for the future and allows us to be an active partner in environmental sustainability for our present and future guests,” said Paul Evasick, general manager Uniondale Marriott.

In addition to the yearly savings, the Long Island Marriott received a rebate of $147,615 for participating in the PSEG Long Island Commercial Efficiency Program. With the efficiency savings and the rebate, the project is expected to pay for itself in less than a year.

In addition to the lighting upgrades, the Long Island Marriott also installed a 15 ton Roof Top Air Conditioner for a rebate of $6,000. This unit will save the hotel 8,800 kWh and approximately $1,400 per year.

Independent annual evaluations by Opinion Dynamics Corporation have found PSEG Long Island’s Energy Efficiency and Renewable Energy Programs to generate energy savings that are cost-effective. The evaluation for 2014 found the Commercial Efficiency Program to have a benefit/cost ratio of 3.2, which means that the program generated $3.20 in benefits to the utility and its ratepayers for every $1.00 in costs to operate the program, including rebates.