Recent 12th Long Island Fight for Charity hits record-breaking number of boxers and bouts while raising over $250,000 in funds for Long Island charities.

Photo by: Long Island Fight for Charity on Facebook.

Melville, NY - December 8, 2015 - The recent Long Island Fight for Charity, one of Long Island’s largest and most anticipated annual charity fund raising and networking events broke previous attendance numbers and raised over $250,000 for Long Island – based charities at the 12th Main Event on November 23. The event card featured 13 bouts, the highest number ever in the history of the organization, with 26 local business professionals going toe-to-toe in the boxing ring to the cheers of a sold-out crowd. There is no other charity event like this anywhere in the country. 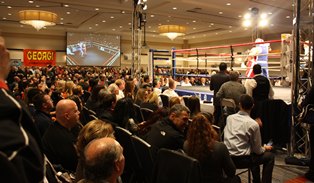 Boxers went through rigourous training to improve their physical stamina.

Over 1,200 fans packed the ballroom at the Long Island Hilton to network and enjoy a tasting reception of food and beverages generously donated by over 35 local restaurants and wine and spirits companies. Over the past several months the boxers raised hundreds of thousands of dollars by hosting individual and team fund raisers across Long Island. The boxers prepped for their bouts by training at least twice a week to start, ramping up to more frequent and even daily workouts in the final weeks leading up to the Main Event. While undergoing rigorous training the boxers improved their physical stamina and, in total, lost hundreds of pounds.

“We had a remarkable group of dedicated volunteer boxers this year. They showed tremendous character and determination as they trained and raised funds for Long Islanders in need. Rick Iaccarino of Barnes Iaccarino & Shepherd LLP broke the FFC’s individual fund raising record by bringing in more than $135,000,” said co-founder Jamie Austin.

To view photos from the 12th Main Event visit here

“To see the boxers train for months and selflessly give their time to raise funds to help us reach our goal is awe-inspiring. Just their dedication of time to the training process for this event speaks volumes about them. In the end, the real heroes are the boxers and what they have accomplished,” said Co-founder Jeff Cohen.

For more information about this event and to volunteer as a boxer for the 13th Long Island Fight for Charity scheduled for Monday, November 20, 2016 go to www.lifightforcharity.org