Investigation found that Oliva was unconstitutionally targeted, investigated, and prosecuted. 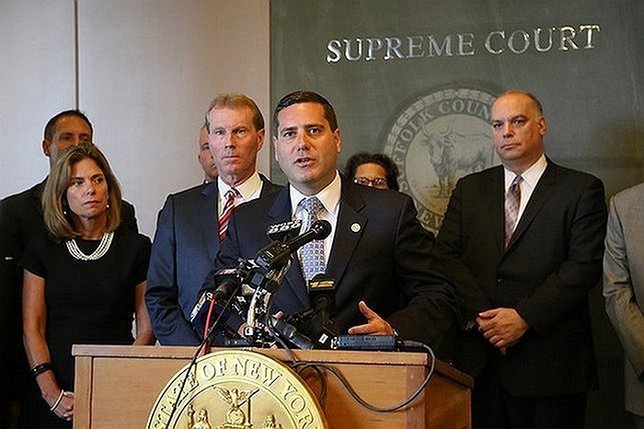 Suffolk County District Attorney Timothy D. Sini has announced the dismissal of the criminal case against Suffolk County Police Detective John Oliva following an investigation by the Office’s Conviction Integrity Bureau (“CIB”), which resulted in the Office’s filing of an affirmation in support of vacating his conviction and dismissing the charges against him. Oliva pleaded guilty in 2014 to Official Misconduct in connection with a wiretap investigation conducted by former Suffolk County District Attorney Thomas Spota and his aide, Christopher McPartland, whom the investigation determined unconstitutionally targeted, investigated, and prosecuted Oliva to retaliate against him and further a conspiracy to obstruct justice that resulted in their recent federal convictions and sentences.
“As our affirmation sets forth and as Justice Camacho found in his ruling, this unconstitutional prosecution was brought for vindictive reasons and constituted outrageous government conduct,” District Attorney Sini said. “This was an abuse of power at the highest level of law enforcement. I created the CIB to investigate and remedy wrongful convictions, which is what was done here today. I am grateful to the CIB and the Court for righting this injustice.”
The motion to vacate Oliva’s conviction was filed in Suffolk County Court by his defense counsel, Bruce Barket and Donna Aldea, and an affirmation in support of the motion to vacate was filed today by Howard S. Master, Special Counsel to the District Attorney and Chief of the Office’s Special Investigations Division. Suffolk County Acting State Supreme Court Justice Fernando Camacho granted the motion, thus vacating the conviction.
The CIB’s investigation of Oliva’s case, which is summarized in the affirmation filed in support of Oliva’s motion, included a review of testimony provided at the federal trial of Spota and McPartland, who were each convicted in December 2019 of obstructing a federal civil rights investigation into former Suffolk County Police Department (“SCPD”) Chief of Department James Burke’s assault of a prisoner by orchestrating a cover-up of the assault.
During the federal trial, it was revealed that Spota, McPartland, Burke, and other members of the obstruction of justice conspiracy decided to target Oliva for investigation and prosecution because he had become an enemy of theirs and was suspected of revealing embarrassing information about them to the press.  Following a four-month wiretap investigation, Oliva was charged by way of a Superior Court Information with Grand Larceny in the Fourth Degree, a class E felony; Computer Trespass, a class E felony; and Official Misconduct, a class A misdemeanor.  He pleaded guilty on Sept. 9, 2014 to Official Misconduct and was sentenced to a conditional discharge.
In August 2021, Oliva, through counsel, submitted an application to the CIB for a review of his case. As detailed in the affirmation filed with the Court today, the investigation found that Oliva’s claims were substantiated. Specifically, the investigation found that:
Launched by District Attorney Sini immediately upon his taking office in 2018, the CIB aims to achieve and ensure justice by investigating claims of innocence, remedying identified wrongful convictions, and providing proactive support and recommendations to the Office to prevent wrongful convictions.