Chambers of Horror NY, a local haunt located in Hauppauge, recently had their commercial for their Christmas-themed Haunted House banned from cable TV. 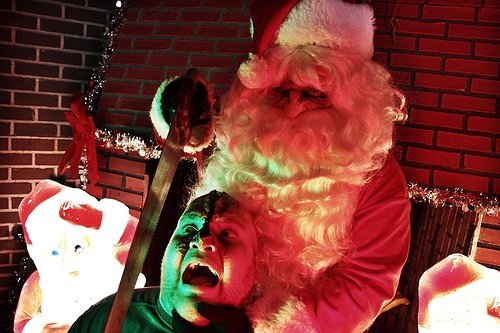 Hauppauge, NY - December 6th, 2014 - Some just don’t want the jolly red guy tampered with. Hauppauge horror house, Chamber of Horrors NY recently had their Christmas themed haunted house commercial banned from airing on local cable TV due to its graphic and disturbing nature. The commercial is for A VERY SCARY XMAS, advertised as” Long Island’s FIRST and ONLY” off season holiday horror show.
In the 30 second TV spot, Santa is still the star, but instead of his usual jovial self, he is an evil and twisted elf gone rouge and he’s accompanied by two screaming children and a chainsaw. The commercial was to air only on late night but local cable providers refuse saying “It’s a lot scarier than their commercial for their Halloween show and much more disturbing”
Chamber of Horrors NY was rated 9.5 out of 10 on LIHauntedHouses.com and attracted extensive on site news reports from WPIX TV Ch 11, News 12 and Fios One News, Newsday and other major media outlets. Horror movie news website Dread Central recently picked up the story and helped deliver news of the event nationwide.
“This is not a holiday show for the faint-hearted, but rather an interactive theatrical experience.  As participants go from room to room, the settings and characters get progressively more frightening - walk into the kitchen and instead of ginger bread baking, you mind find a gingerbread man baking you!  You'll also meet killer snowmen, evil elves, man-eating reindeer and murderous Christmas trees that come to life and it is all in good fun and you get a free photo with Santa!” says Marty Arominski, owner of Chamber of Horrors NY
Chamber of Horrors "A Very Scary Xmas" will have a limited run, Friday and Saturday Nights, December 12th, 13th through 19th and 20th. The show is located inside Matt Guiliano's Play like a Pro, at 1745 Express Drive N, Hauppauge, NY 11788. For moreinformation and to purchase tickets online, please visit Chamber of Horrors NY's Official Website.
For more information, Please Contact:
Will Wallace
Paradise Advertising & Public Relations
631-651-8950
Will@ParadiseAdsNY.com