Student athletes raised $1,500 for the organization in honor of those who have fought, survived and been taken from breast cancer. 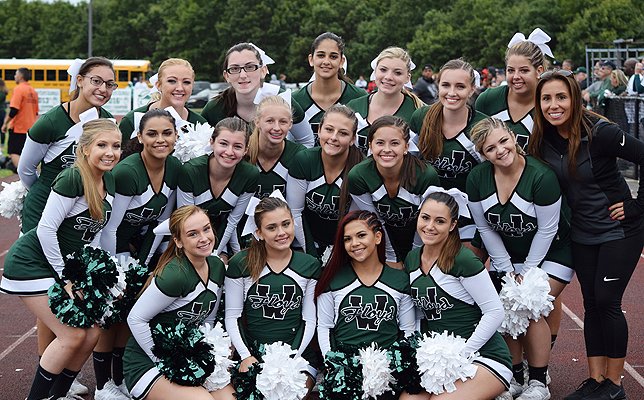 Mastic Beach, NY - December 5, 2017 - The William Floyd Colonials varsity and junior varsity cheerleaders recently held their annual charity game to raise money for New York Cancer and Blood Specialists, an organization that provides treatment and support to cancer patients and their families in close proximity to their own communities. Altogether, these caring student athletes raised $1,500 for the organization, in honor of those who have fought, survived and been taken from breast cancer.
“With each charity game we do, and will continue to do, I ask the girls to choose something that is close to their hearts,” said Alyssa Cabrera, head varsity cheerleading coach. “Many family members of our cheerleaders have been or are currently affected by breast cancer. So that is the reason we decided to do this and provide support to a local center that helps those within our own communities.”
Sarah Gerle, a senior captain of the cheerleading team, who lost her mother, Danielle Lentini, to breast cancer at 11 years old, will never forget how New York Cancer and Blood Specialists provided her mother with great support and treated her family as if they were members of their own. This fundraiser was also held to honor other women in the William Floyd cheerleading family – Fran D’Amore, who took over legal guardianship of Sarah and her brother after her mother passed away, and is cancer free five years herself; and Janeth Billian, mother of junior captain, Theresa Billian, who is cancer free for nine years.
The cheerleading team accomplished this at the last regular season home football game of the season by selling various items such as t-shirts, bracelets, car magnets, pom poms, key chains, pencils; as well as hair extensions with the help of 2017 graduate and former cheerleader Felicia Cangin, who helped lead last year’s charity effort to collect $1,000 for Rett Syndrome in honor of her cousin, Valentina Priolo.
“It was really a community effort and I'm so thankful for the parents, brothers and sisters of my team who helped out,” said Coach Cabrera. “My JV girls with Coach Adrianne Thilman were instrumental in selling items to both the home and visiting teams’ fans.” Coach Cabrera and the cheerleading team would also like to offer special thanks to William Paca Middle school art teacher Marco Antenucci who sketched the sign; as well as Bruce Graham at East End Screen Printing who donated the shirts for this effort.
The team will also be entering the “Team Up For Community” Holiday Sports Hero Challenge again, a contest that they won last year resulting in a $3,000 grant for the cheerleading program. Voting for that will run from December 11-17, 2017. Please stay tuned for an announcement on how to vote!