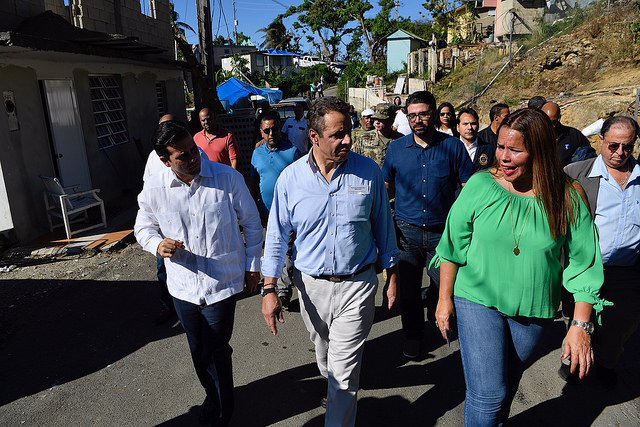 Albany, NY - December 4, 2017 - Governor Andrew M. Cuomo today announced 1,000 community water filtration systems will be distributed to Puerto Rico in the coming weeks through the Empire State Clean Water Fund.  The $1 million initiative, privately funded in partnership with the Partnership for New York City, the Orthodox Union and TIDAL, was first announced by Governor Cuomo in late October. These new 1,000 community water systems can filter 12 liters per hour, enough water for 75 to 100 people per day, and can remove 99.9999 percent of bacteria, 99.999 percent of viruses and 99.99 percent of protozoan cysts.
"When one American is in trouble, we are all there, because we are one, and we will continue to stand up for our brothers and sisters in Puerto Rico," Governor Cuomo said. "These new water filtration systems will provide clean water to thousands of Puerto Ricans in need, and are the latest step in our commitment to help Puerto Rico get back on its feet as they continue to rebuild and recover."
Two hundred and twenty-five water filtration systems have already been distributed to communities in need in partnership with the Carlos Beltran Foundation, a non-profit partner on the ground. The Empire State Clean Water Fund will continue to purchase and distribute filters to communities in need in Puerto Rico.
The availability of clean water continues to be one of the most critical barriers to the relief and recovery effort. As with any flooding-related disaster, the primary concern with dirty water is the spread of microbial diseases such as E. Coli and Cholera and with these efforts, New York is taking direct action on solving this issue. The filtration systems will provide clean drinking water to thousands of Puerto Ricans, and New York has additionally donated more than two million bottles of water to the relief effort.
To date, New York has delivered and distributed:
And deployed: