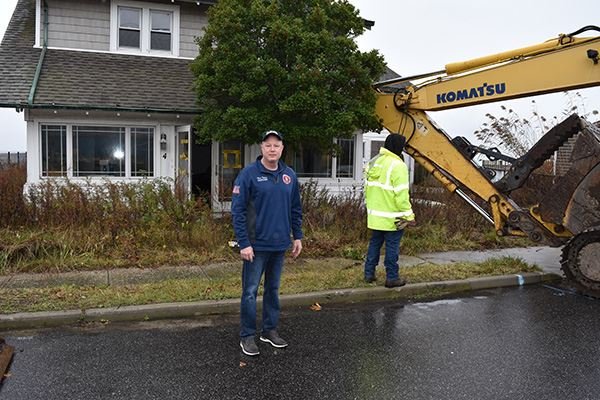 Councilman Neil Foley at the demolition of an abandoned “zombie house” located at 4 Grandview Drive in Blue Point. 11/21/21. Photo: Town of Brookhaven.

After receiving multiple Brookhaven Town building code violations and the source of resident complaints through the years.

The house was demolished in accordance with Chapter 73 of the Town Code. The cost of demolition and debris removal is the responsibility of the property owner, and the Town places a lien on the property that is then placed on the tax bill. Suffolk County reimburses Brookhaven Town and then they collect the money from the property owner.

“The location of this house is right on the Great South Bay in a neighborhood where people take pride in their homes and property,” said Brookhaven Councilman Neil Foley.

He said that the residents were thrilled to see the eyesore removed.

“A blight is finally gone, and I will continue to work with our Law Department to crack down on property owners who allow houses like this one to have a negative impact on the community,” he added.