Fair Media Council event’s main purpose is to open dialogue with local, regional and national news media and the public. 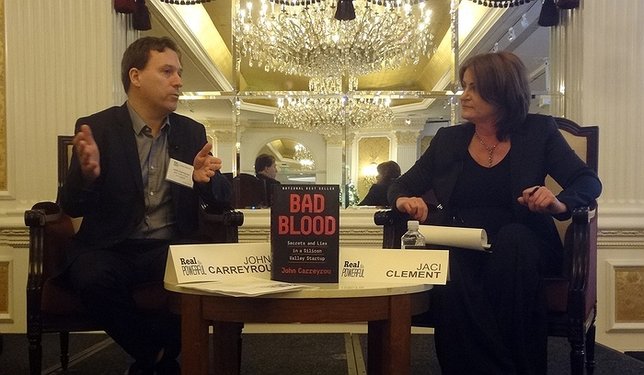 Garden City, NY - November 30, 2018 - The second annual The News Conference: Real and Powerful, held on November 29th at the Garden City Hotel, is now in the history books. The brainchild of Jaci Clement, CEO of watchdog group the Fair Media Council (FMC), Real and Powerful’s main purpose is to open dialogue with local, regional and national news media and the public as a way of helping the Average Joe to navigate the ever-confusing world of modern journalism.
Some of the major speakers at the event included Patrick Dolan, owner and CEO of Newsday and Founder of News12 Networks, as well as Wall Street Journal’s acclaimed investigative reporter John Carreyrou.  In addition, there were number of in-depth panel discussions that proved indispensable for anyone looking to get media-savvy in the today’s complex news landscape.
Clement was extraordinarily pleased with the turnout at the event, and noted that she had been receiving very positive feedback from everyone she had spoken to in regards to the sheer amount of content and information that was being made available to one and all present.
“Everything is just phenomenal,” she said. “Everyone is just raving about the speakers and the sessions and the chance to just get to talk face-to-face with a lot of news people that they just don't usually have the opportunity to meet in their day-to-day lives.” 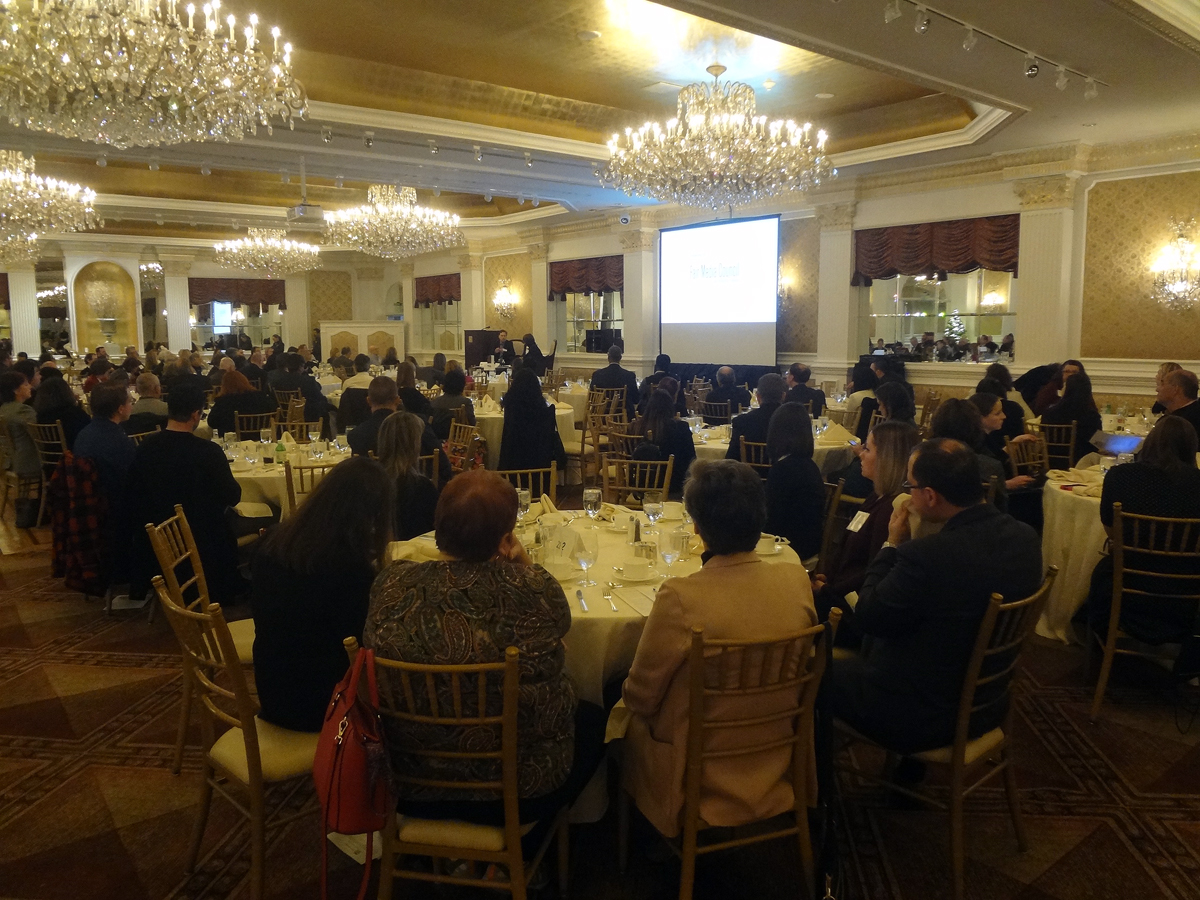 The interview with John Carreyrou was carried out in the Garden City Hotel’s ballroom while hundreds of guests at engrossed. Photo Credit: Chris Boyle
A great deal of buzz surrounded Jaci's meeting with Newsday CEO Patrick Dolan, where he spoke about the changes going on at his publication in order to keep it relevant for a technology and social media-obsessed 21st-century audience.
“I was really impressed by his commitment to local journalism. He spoke a lot about how they're moving from the idea that they are a newspaper to a full experience,” she said. “And by that I mean it's not just using more multimedia, but also launching live events and giving people new and different things to do so that they feel like they're part of a club.”
Attendance, Clement noted, had leapfrogged over the standard set at the previous year’s Real and Powerful event, with upwards of 300 members of the business and media community attending. 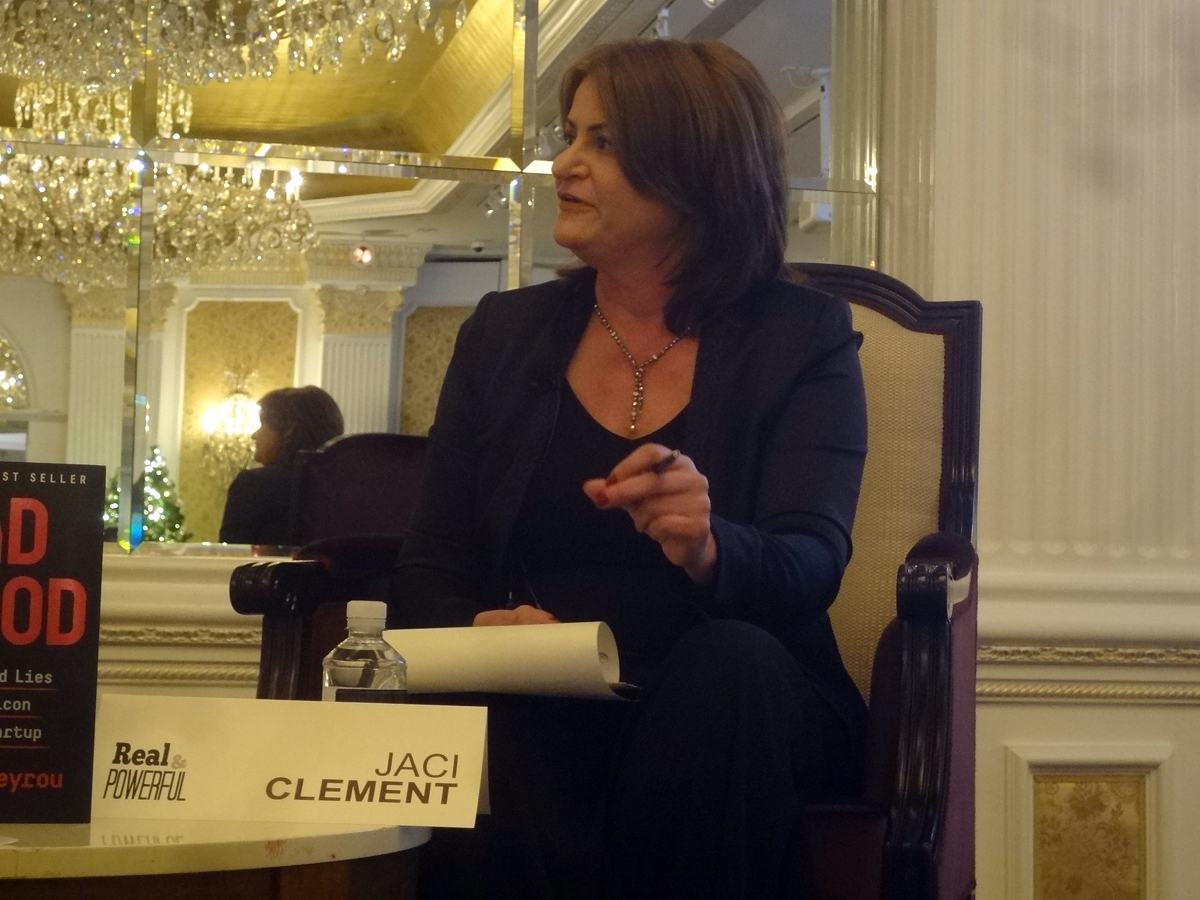 Jaci Clement, CEO of watchdog group the Fair Media Council. Photo Credit: Chris Boyle
Clement also was looking forward to her sit-down interview over lunch with the Wall Street Journal's John Carreyrou, an Pulitzer Prize-winning journalist who was most recently responsible for an earth shattering investigation into the alleged acts of fraud perpetrated by infamous blood testing lab Theranos, as chronicled in his recently released book bad and titled Bad Blood: Secrets and Lies in a Silicon Valley Startup.
“I'm very prepared for my interview with John...I did my research, including reading his book. Actually, I devoured his book! I'm not here to sell books, but I have to tell you...you need to buy his book. It's that good,” she said. “It really reads like a thriller. It's a story about healthcare, it's a story about technology, and entrepreneurship in Silicon Valley, but most importantly, it's a story about what would have happened if that blood testing company was allowed to continue and people were unaware of the fraudulent activity that they were up to. It's an important book.” 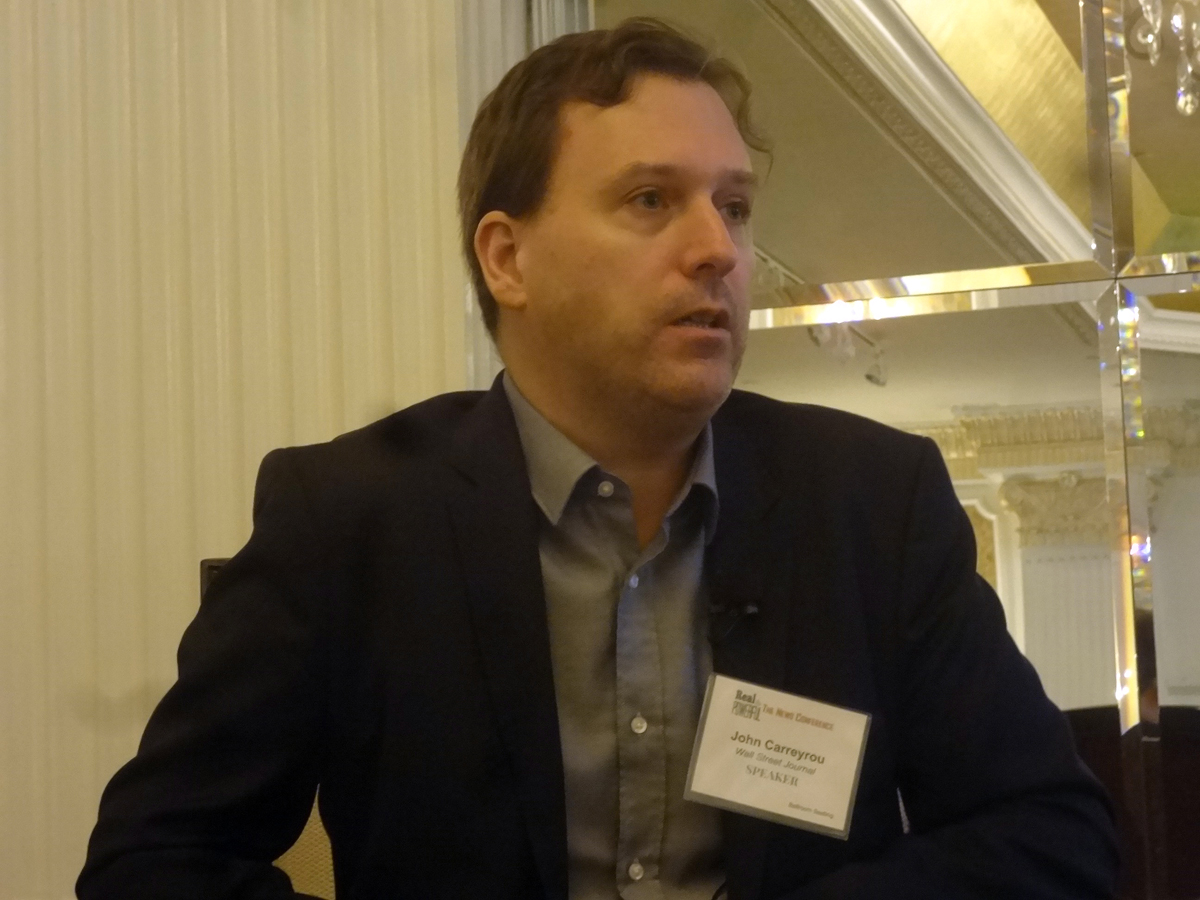 Acclaimed Wall Street Journal investigative reporter John Carreyrou. Photo Credit: Chris Boyle
The interview with Carreyrou, carried out in the Garden City Hotel’s ballroom while hundreds of guests at engrossed, featured a great deal of talk about the Theranos scandal, which involved the start-up’s claims of a revolutionary breakthrough in blood-testing technology that was later proven to be fraudulent. Carreyrou went on in-depth about his early suspicions in the case, the extraordinary amount of research and leg-work he put into his story, and the supreme importance of corroborating information and sources in order to make sure that the story that was eventually published was as accurate, true-to-fact, and revealing as possible.
“John Carreyrou is a prime example of the importance of a critical thinker the newsroom,” Clement said. “It's very easy to follow the path of mainstream media where everyone gets caught up in the same news reporting cycle, but John is making his own decisions and doing a lot of work with his investigative reporting. It's an old-school mix of shoe leather to the sidewalk and modern technology. He's a great example of the fact that even though there are so many challenges in the journalism field, there is strong, quality journalism out there…you just need to know where to look.”
Merely surveying the success of this year's The News Conference: Real and Powerful event isn't enough for a busy body like Jaci Clement; she's already looking ahead to next year and how she can make the conference the very biggest and best she possibly can...all in the name of creating a media-savvy society, a lofty and honorable goal that grows ever more difficult to achieve every year, she said.
“A lot of the content we’ll be offering next year is just contingent on what's going on in the news...we try to keep it topical and relevant, so I have no idea what will happen,” she said. “We used to talk about the ‘24-hour news cycle,’ and now people refer to it as the ‘24-second news cycle.’ It could be a whole different ballgame by next year, but the underlying premise is creating media-savvy news consumers so that they feel confident in navigating today's media landscape. That is always the focus.”