An audit of the County’s concessions vendor found violations of the Living Wage Law, according to the Nassau Comptroller's office. 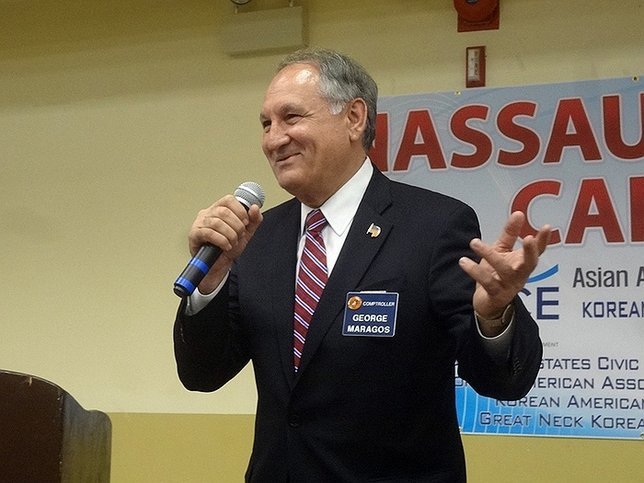 Mineola, NY - November 30, 2017 - An audit of the County’s concessions vendor, Dover Gourmet Corporation (“Dover”), although obstructed by the vendor’s failure to cooperate, found violations of the Living Wage Law, incorrect information submitted to obtain and retain Living Wage waivers, and no evidence of park employees having been fingerprinted as contractually required to protect residents. The vendor made repeated assurances to provide timely information to the auditors, but time and time again they failed to provide auditable records. The audit period covered 2013-2015. A previous audit of this vendor, released on December 12, 2016, found possible financial violations with money owed to the County. This audit will be forwarded to both the District Attorney and the County Attorney, as was the case with the previous audit.
“The lack of cooperation with an audit heightens suspicion of impropriety,” said Comptroller George Maragos. “At this point, the appropriate next step would be to refer the findings to the County Attorney.”
Nassau County has two licensing agreements with Dover, granting Dover exclusive rights to provide catering, concession and vending machine services at multiple County parks, recreation facilities and at various County office buildings.
Significant findings of the audit were:
The County’s Administration granted Dover a Living Wage Law waiver for 2014. Dover filed an application with the County for a 2014 Living Wage Waiver using inaccurate wages to calculate their eligibility ratio, which the County’s Administration relied on when granting the waiver.  Dover’s 2015 Living Wage waiver renewal and any subsequent renewals based on the 2014 Living Wage waiver should not have been granted.
The Nassau County Living Wage Law was enacted by the Nassau County Legislature in 2006 to raise the minimum wage of employees working for the County or the County’s contractors.  The Comptroller’s Office is responsible for monitoring compliance with the Law.  The Living Wage is currently $13.98 per hour for employees receiving health benefits, or $16.07 per hour for employees who do not receive health benefits.
For a copy of both audit reports regarding this vendor, please connect with Comptroller Maragos online: http://www.nassaucountyny.gov/agencies/Comptroller/index.html.