The New York Jets in partnership with the USO helped transform a seemingly ordinary afternoon into a friendly, but competitive, Turkey Bowl event. 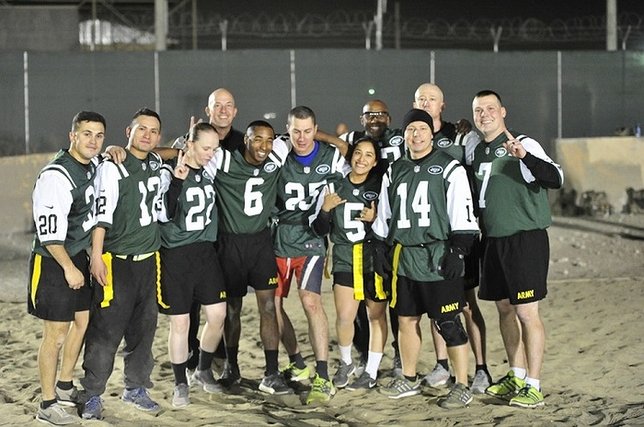 Afghanistan - November 23, 2016 - The New York Jets in partnership with the USO helped transform a seemingly ordinary afternoon into a friendly, but competitive, Turkey Bowl event at the Bagram Air Base in Afghanistan, the largest U.S. military base in the region. The action-packed event took place near the Pat Tillman USO Center, named for the former Army Ranger and Arizona Cardinals safety, as nearly 50 U.S. military members suited up for the game donning custom-made jerseys provided by the Jets.

The Blue Star Mothers of America, a non-profit organization whose mission is to support the military through service, fueled military members with over 100 “Humvee Gate” care packages.  New footballs, flag belts and award balls were also sent over to support the Turkey Bowl. 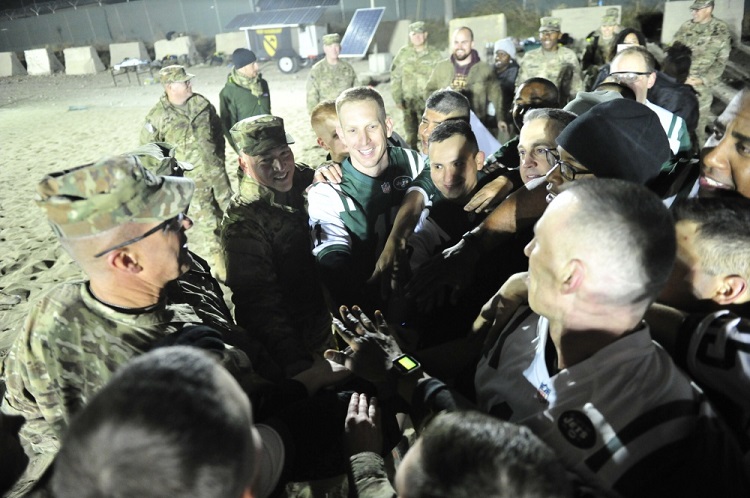 "We thank all of our NFL teams that support our troopers, particularly the New York Jets for their support of the Turkey Bowl in Afghanistan this Thanksgiving weekend,” said Lieutenant General Joseph Anderson. “Most of our soldiers are athletes who cherish the opportunity for a little competition and team building while deployed or at home.  Playing sports such as football while overseas in a combat zone is a huge distraction and the game makes everyone feel a little closer to home while they are away from their loved ones. We cannot do what we do without the support of our fellow Americans."

For the day, the 1st Cavalry Division and USFOR-A were pitted against each other. Ultimately, Team 1st Cavalry Division prevailed, winning 79 to 62. SPC Keffer, quarterback for the 1st Cavalry, earned MVP honors. Before the game began, military members spoke with Jets center Nick Mangold via Skype for a pre-game talk before being treated to music and food outside of the Pat Tillman USO Center.

“It was an incredible honor to speak with the men and women of our military who every day serve to protect our country,” said Mangold. “Today was just a small token of our gratitude for their dedication and sacrifice.”

Wednesday’s game marked the second time the New York Jets and the USO have collaborated to host a flag football game. In August, the Jets sent custom-made jerseys, footballs, flag belts and more to the Bagram Air Base, where members from the 10th Mountain Division, 518th Resolute Support Sustainment Brigade and the 25th Signal Battalion of the U.S. Army played a handful of games.

“The men and women of the 1st Cavalry Division and U.S. Forces Afghanistan are deeply appreciative of the tremendous love and support you've shown from home, especially during the holiday season,” said Maj. Gen. John C. Thomson III, 1st Cavalry Division Commanding General. “This is a wonderful opportunity to engage in All-American turkey and football and I could not be more proud of the competitive spirit shown by our outstanding troopers.” 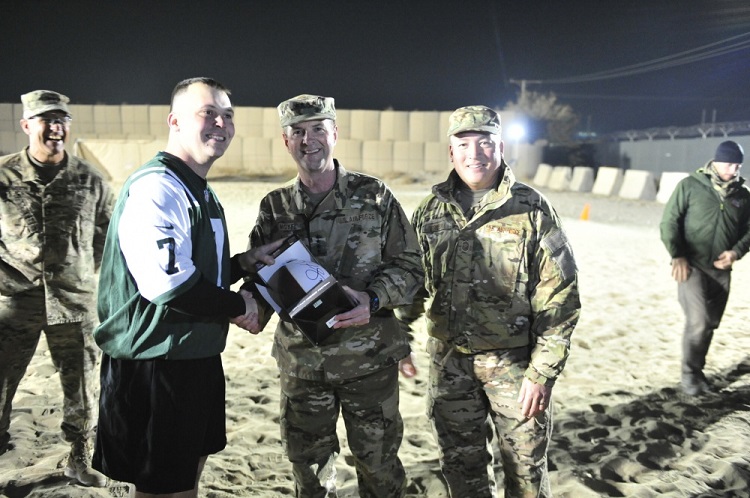 Eight soldiers, who participated in a Jets-themed flag football game earlier in the year while they were deployed to Bagram Air Base in Afghanistan, led the Jets out of the tunnel during introductions in Week 10. The group also presented Jets owner Woody Johnson with a signed game ball from the August event.