Senator Brooks was invited to help the Scouts fill a requirement to meet with a community leader. 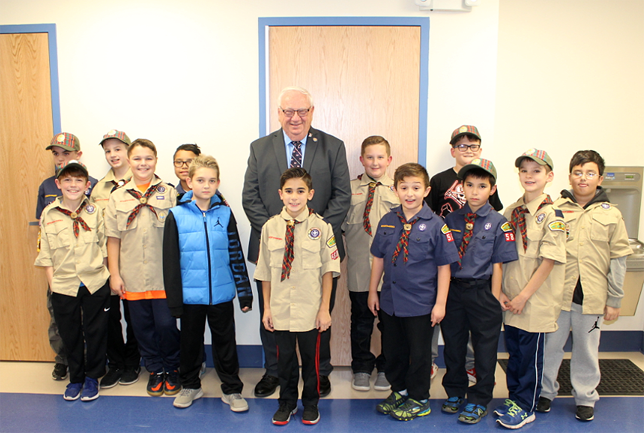 Long Island, NY - November 29, 2017 - Senator John E. Brooks visited Webelos Scouts Pack 580 in Bellmore on Tuesday night, November 28th. Senator Brooks was invited by Den Leader Alison Prainito to help the Scouts fill a requirement to meet with a community leader; discuss that leader's role in their community, and further explore important issues facing the community. The Scouts are 10 or 11 years old and currently in the fifth grade.
The Scouts, members of two Webelos Dens in Scout Pack 580, which is sponsored by St. Barnabas, were prepared with questions for Senator Brooks. Their topics ranged from what is a Senate bill, and how does it become law; the distinction between a US Senator and a NYS Senator; and how the NYS Senate, Assembly and Governor work together.
“Webelos” is a Boy Scouts of America invented term; an acronym meaning "We'll Be Loyal Scouts” with the name originally from the initial letters of "wolf, bear, lion, Scout", but the rank of "Lion Cub Scout" was dropped in 1967.