To counter the growing pigeon problem at the 51st Street Station in Woodside, boomboxes playing recordings of predatory bird calls have been set up in and around the station. 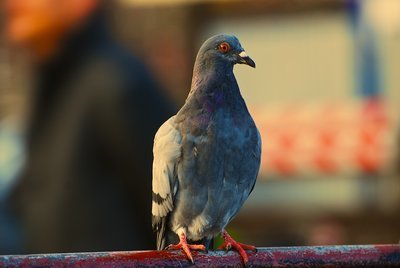 In a new move to get rid of pesky pigeons, the 51st Street Station in Woodside is now echoing with the calls of predatory birds.

Hawks and falcons have not been introduced to the area, but their calls were brought to the city in the form of “squawk boxes” – electronic boxes that play recordings of the predators’ screeches so as to scare away the pigeons that have been settling in Woodside in large numbers.

Pigeons have become more than just an inconvenience at the station – they are damaging people’s clothes and cars, and caking the pavement with bird droppings.

Spikes have been placed in windows and rafters to discourage birds from nesting in and around the station, and “Do Not Feed” signs have also been placed around the station, but neither have had much of an effect on the pigeon population.  City officials contacted pigeon experts, who recommended the use of boomboxes with predatory bird calls as a further step in humanely removing the birds from the area.

“We’re not thinking of exterminating them. We try to figure out a way for all of us to live together well,” said Wild Bird Fund Director, Rita McMahon, to CBS News.

In order for the squawk boxes to work, they must be at an appropriate volume and be considered realistic enough to deter pigeons, but locals have been saying that the sound is too loud.

According to CBS, experts at the Wild Bird Fund say that pigeons may catch on to the trick over time, and that they may eventually learn to live with the noise.  They still believe that the best solution to get rid of the pigeons is to get humans to stop feeding them.