County Executive Urges President to Use “Full Power and Authority” to Prevent Limiting or Eliminating Deduction for State and Local Taxes. 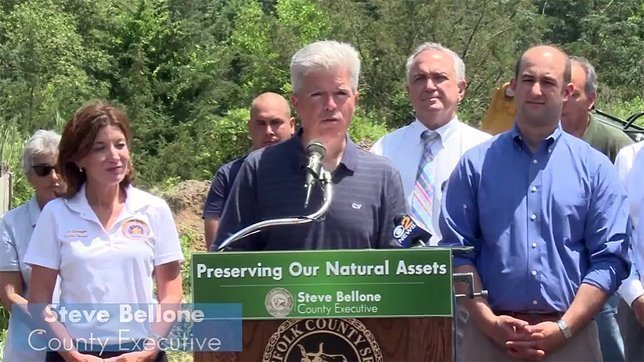 Suffolk County, NY - November 28, 2017 - Suffolk County Executive Steve Bellone today called on President Trump to block legislation under consideration by Congress that could result in significantly higher taxes for middle class families on Long Island.  In a letter to the President, the County Executive urged him to block any legislation that would limit or eliminate the deduction for state and local taxes that has existed within the federal tax code for over a century.
A copy of the County Executive’s letter appears below.
Dear President Trump,
As the Suffolk County Executive representing 1.5 million residents, I am writing to you now with a profound sense of urgency to ask for your help to stop legislation currently under consideration by Congress that could result in significantly higher taxes for middle class families.  Specifically, I am urging you to veto any legislation that limits or eliminates the deduction for state and local taxes that has been part of the federal tax code since its inception in 1913.
The loss of the deduction for state and local taxes, which includes the state income tax and the local property tax, would have a disproportionate impact on Long Islanders.   According to the Long Island Association (LIA), the leading business organization in the region, should this bill become law it could result in an annual cumulative tax increase of $4.4 billion on Long Island.  Given that Long Islanders already send significantly more tax dollars to Washington than they ever get in return - approximately $23 billion a year - this additional tax burden would add insult to injury, and could devastate the local economy.
According to the report by the Long Island Association, Long Island taxpayers at virtually every income level could face a tax increase greater than a thousand dollars a year.  The average annual increase for households with an income level between $25,000 to $200,000 would range from $1,356 to $3,980 and the overall average impact across all income levels could be a staggering $7,794, according to the LIA report.  As you can well imagine, with families stretching every dollar to make ends meet, an increase of even several hundred dollars would force a family to make tough decisions about what they could no longer afford.  An increase of thousands of dollars a year would force them to make stark choices that would undoubtedly be harmful to their family in order to pay the federal government higher taxes.
Worse yet, the tax increases that would result from measures being considered by Congress would reverse recent gains in consumer confidence, negatively effecting taxpayer buying power, hurting families and small businesses.  Moreover, the revenue streams that local governments rely on to fund initiatives such as the battle to eradicate violent gangs like MS-13 would be severely impacted placing an even greater burden on local taxpayers.   And over time, the significantly increased cost of owning a home would also have a devastating impact on the housing market on Long Island, significantly reducing property values.  For most middle class and working class families on Long Island, our homes represent our single most important economic asset.
As a native New Yorker, you understand better than most people in Washington, that what is considered middle class in Madison or Louisville is not the same as in Medford or Melville.  As a fellow New Yorker, I believe you understand that the firefighters and cops, the teachers, nurses and construction workers, many of them veterans or seniors, are the very people who form the backbone of our communities.  These middle class and working class families cannot and should not be asked to shoulder an even larger federal tax burden in order to subsidize tax cuts in other parts of the country.
Mr. President, as a fellow New Yorker, I am urging you to stop Congress from passing legislation that would amount to a massive tax increase on hard working Long Island residents.  There is a reason why every elected official representing Long Island in Congress has stood up to oppose this bill because they understand it would be devastating for Long Island.  We respectfully request that you use your power and authority as President of the United States to make sure this damage never occurs.
Sincerely,
Steven Bellone
Suffolk County Executive