Students performed with inductees Richie Cannata and Albert Bouchard, along with Sal “The Voice” Valentinetti at the LIMHOF Holiday Concert. 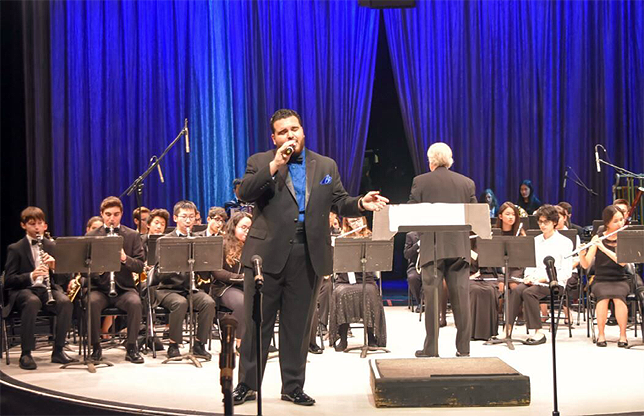 Melville, NY - November 28, 2017 - With over 1,000 people in attendance at the NYCB Theater at Westbury on Sunday, November 19, 2017, Long Island Music Hall of Fame’s (LIMHoF) Holiday Concert was a huge success, having raised over $50K in funds that will benefit LIMHOF music and education program initiatives on Long Island. Students from the John L. Miller Great Neck North High School Orchestra and Chorus, the Oyster Bay High School Wind, Ensemble, the Uniondale High School Show Choir, and the Herricks High School Jazz Ensemble all had the opportunity to perform with music legends Long Island.
“We were thrilled to have more than 200 Long Island student musicians take part in this major event” said Ernie Canadeo, Chairman of LIMHoF. “The fact that they got the opportunity to play with some of our inductees in such a classic venue really made it a once-in-a-lifetime experience.”
The concert featured many special appearances. Albert Bouchard, one of the founding members of Blue Oyster Cult and a LIMHoF inductee, accompanied the Oyster Bay High School’s Wind Ensemble in a rendition of “Don’t Fear the Reaper;” Saxophonist and LIMHoF inductee Richie Cannata, best known for his time with Billy Joel’s original band, joined the Herricks High School Jazz Ensemble in a performance of “New York State of Mind.”
Uniondale High School’s Show Choir shined in gold ensembles as they sang and danced to “Fly Like a Bird” and the holiday favorite, “We Need a Little Christmas.”
Sal “The Voice” Valentinetti, Bethpage native and finalist of America’s Got Talent, was the afternoon’s surprise guest. Valentinetti joined the John L. Miller Great Neck NorthHigh School Orchestra and Chorus in renditions of “What a Wonderful World” and “Hello, Dolly!”
When asked to perform at this event, Valentinetti jumped at the opportunity. “Music is such an important part of education, and it’s a building block for these kids,” he said.“I would do anything to help the arts, and to see high schoolers excited about classical and jazz music is a home run in my eyes.”
Funds raised at The Holiday Concert will go towards scholarships, development of seminars, the mobile education museum, and other community initiatives promoting Long Island music education.
The Holiday Concert was made possible by the event’s premiere sponsor, New York Community Bank and many other generous sponsors, including: D’Addario, Sam Ash, AVZ Public Accountants, Farrell Fritz, The First National Bank of Long Island, Eisner Amper, Merrill Lynch, The EGC Group, Creative Plan Designs, Berkman Henoch, Island Federal Credit Union, and others. For more information about LIMHOF, and if you wish to donate, visit limusichalloffame.org.