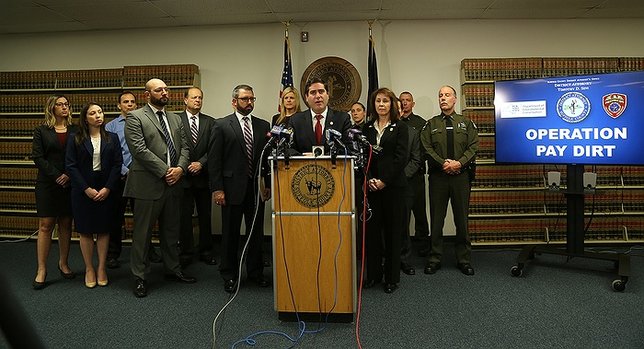 Riverhead, NY - November 27, 2018 - Suffolk County District Attorney Timothy D. Sini, the New York State Department of Environmental Conservation (“DEC”) and the Suffolk County Police Department today announced the unsealing of a 130-count indictment that charges 30 individuals and nine corporations for an alleged conspiracy to illegally dispose of solid waste at 24 locations on Long Island.
“What we’re dealing with here is an epidemic of illegal dumping in Suffolk County,” District Attorney Sini said. “It’s gone on far too long, and our message is very clear: we will not tolerate this criminal conduct in our county. We will do whatever it takes to uncover illegal dumping.”
An investigation by the District Attorney’s Office, DEC and Suffolk County Police Department into the alleged conspiracy by the defendants to illegally dump solid waste in various locations across Long Island began in February 2018. The months-long investigation, known as “Operation Pay Dirt,” involved the use of electronic surveillance, including court-authorized eavesdropping, and physical surveillance.
The alleged conspiracy centered around Anthony Grazio a/k/a “Rock,” 53, of Smithtown, who acts as a “dirt broker” by arranging for locations where trucking companies could illegally dispose of solid waste. Grazio posted advertisements on Craigslist for “clean fill” for landscaping projects and solicited homeowners over the phone and in person for locations to use for dumping.
The material that was illegally dumped came from recycling and transfer stations located in New York City and Long Island, including Queens-based Durante Bros Construction Corp. It was then transported and dumped at the sites by trucking companies including DJCI Enterprises, Inc.; IEV Trucking Corp.; Kris Trucking Corp.; Modern Leasing, Inc. doing business as Dumpmasters; New York Trucking and Carting Corporation; NYTAC Corp.; ClairCo Industries, Inc., doing business as St. Clair Trucking; and Starfire Industries, Inc., doing business as Platinum Aggregates, Inc.
“During their phone conversations, Rock and the owners or operators of the trucking companies would discuss residential and commercial sites and the amount of material that could be dumped at a particular site,” District Attorney Sini said. “The bigger the property, the better for the defendants, as this scam was all about making money. When an ideal property was found, Grazio could often be heard directing his co-conspirators to ‘hit it hard.’ Grazio approved material being dumped at residential locations even when notified that material smelled like diesel fuel or had pieces of wood, asphalt, concrete, large boulders, or even glass contained in the material.”
Kris Trucking Corp. is alleged to have taken construction and demolition debris directly from construction sites in New York City and illegally dumped it at residential and commercial locations.
“They did this to make money, they did this to save on operating costs, and they did it at the expense of the health of our residents,” District Attorney Sini said.
DEC testing of the illegally dumped solid waste found that six of the locations contained acutely hazardous substances and 17 of the locations contained hazardous substances under New York State Environmental Conservation Law. The acutely hazardous substances included aldrin, dieldrin and heptachlor, which are all pesticides. The hazardous substances included arsenic, beryllium, cadmium, cobalt, chromium, copper, lead, nickel, zinc and mercury, which are all metals.
Nineteen of the 24 locations are residential, four are commercial, and one is a school. The solid waste dumped at the school was immediately removed.
“It’s bad enough to dump solid waste and dangerous materials in someone’s front or backyards given the dangers that it poses to children and others,” District Attorney Sini said. “But what’s even worse here in Suffolk County is that we live on an aquifer where we get our drinking water, so when we deal with illegal dumping, there is also the potential for it to affect our water supply.”
The top count of the indictment is Criminal Mischief in the Second Degree, a D felony, which carries a maximum sentence of up to seven years in prison.
“Illegal solid waste dumping poses a serious threat to New York’s environment and burdens communities across Long Island,” said DEC Commissioner Basil Seggos. “Through Governor Cuomo’s leadership, New York has stepped up enforcement on unscrupulous businesses that continue this criminal behavior. By collaborating with partners like the Suffolk County District Attorney’s Office, New York will help put an end to potentially hazardous materials entering our communities.”
“This case sends a message that we will not tolerate the dumping of prohibited materials into our communities,” Suffolk County Police Commissioner Geraldine Hart said. “Many of those who engage in illegal dumping do so because it is cheap, convenient and is perceived as the cost of doing business. The Suffolk County Police Department is committed to curbing such activity. We will not stop until we are able to apprehend those who are responsible for these crimes for financial gain. The Suffolk County Police Department is not only committed to serving our residents, but takes pride in working with our partners to protect the land that makes our communities such a great place to live and raise a family.”
The following defendants are charged by way of the indictment in connection with the illegal transport and dumping of solid waste:
This case is being prosecuted by Deputy Bureau Chief Nicholas Mauro, who oversees the Enhanced Prosecution Bureau’s Electronic Surveillance Unit, and Assistant District Attorneys Luigi Belcastro, Laura Sarowitz and Adriana Noyola, of the Enhanced Prosecution Bureau.
A criminal charge is an accusation. A defendant is presumed innocent until and unless proven guilty.