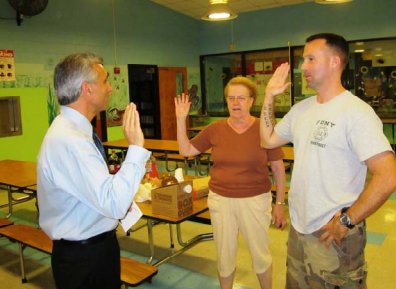 North Babylon, NY - November 25, 2013 - Members of the Parkdale Civic Association in North Babylon recently invited Suffolk Legislator Lou D’Amaro (D-North Babylon) to attend their monthly meeting to discuss issues of local concern, learn about legislative initiatives that impact the community and to swear in officers. Topics of discussion included: speeding vehicles, water levels at nearby Deer Lake and the County budgets. Residents had the opportunity to ask questions and were invited to contact Legislator D’Amaro if he could be of assistance on any matters
Legislator D’Amaro also swore in new Parkdale Civic President Terence McSweeney and Recording Secretary Joanne Marquardt while thanking outgoing President Gene McParland for his service to the community.
“The boundaries of my legislative district were recently amended to include the Parkdale communities so I wanted to hear what was on the minds of my new constituents,” Legislator D’Amaro said. “I thank the members of the Parkdale Civic Association for their insight and interest, wish the new officers well and pledge my continued commitment to maintain and improve our local neighborhoods.”
If you would like Legislator D’Amaro to address your group or organization, contact his district office at (631) 854-4433.