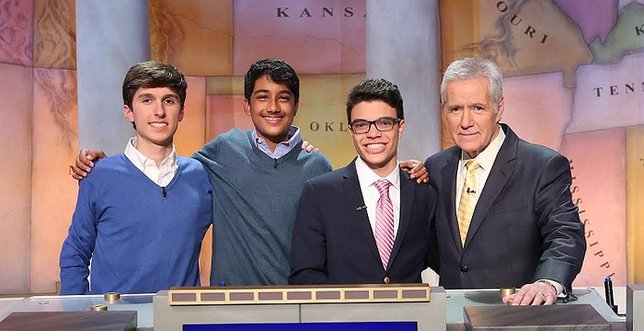 “It feels awesome,” Narayan said after his win. “This was such a great experience, and I never would have expected to make it this far. Getting to the semifinals was my goal for the tournament, and when I did that, everything after was just like the cherry on top.”

Narayan, who said he was “definitely feeling intimidated” by Fischthal and Borecki going into the finals, tried to remain calm and focus on strategy.

“I kind of had to psych myself up to mentally prepare, because it was really scary going up against them,” he said. “I focused more on the buzzer during the finals, and I also began to search for Daily Doubles. I knew searching for the Daily Doubles was one of Michael’s strategies, which had worked wonders for him, so I wanted to get them out of the way and away from my competitors.”

Fischthal, who came in second, did not actively seek out Daily Doubles like his fellow finalists, relying instead on a more traditional approach to his gameplay.

“I didn't have any particular strategy, except in the sense that I wanted to go out there and play my own game,” he said. “I didn’t want to play in a way that was that risky, so I was more focused on controlling the board. I think you might notice that almost every time I regained control of the board, I went back to lower-valued clues and proceeded down the category.”

“There can’t be just one highlight for me,” the third-place finisher said. “But I’d have to say my favorite was in the first game of the finals when Alex asked, ‘Michael, I know you well enough by now. Which $800 clue would you like to start with?’”

For information about becoming a JEOPARDY! contestant, please visit the Be a Contestant section of Jeopardy.com

JEOPARDY!, America’s Favorite Quiz Show®, and its host, Alex Trebek, are in their 33rd season in syndication. With 23 million viewers each week, JEOPARDY! is the top-rated quiz show on television, and has won several awards and distinctions over the course of its 30+ years on the air, including setting a Guinness World Records® record for the most Emmy® Awards won by a TV game show (33 Emmys). JEOPARDY! is produced by Sony Pictures Television, a Sony Pictures Entertainment Company; Harry Friedman is Executive Producer. JEOPARDY! is distributed domestically by CBS Television Distribution and internationally by CBS Television International, both units of CBS Corp. For more information, please visit Jeopardy.com.