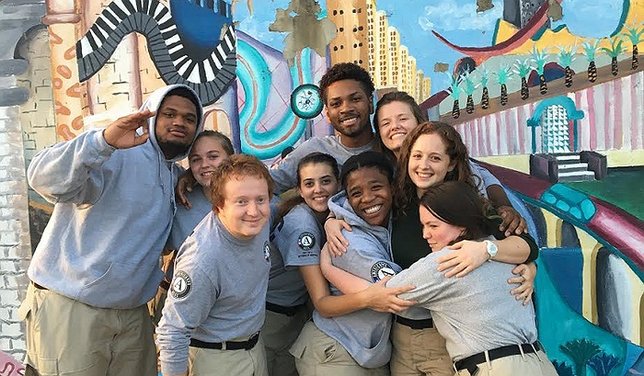 Colleen Roach, 25, of Sayville, embraced by her team Delta 6 outside in front of local murals next to the largest survivor shelter in Louisiana. 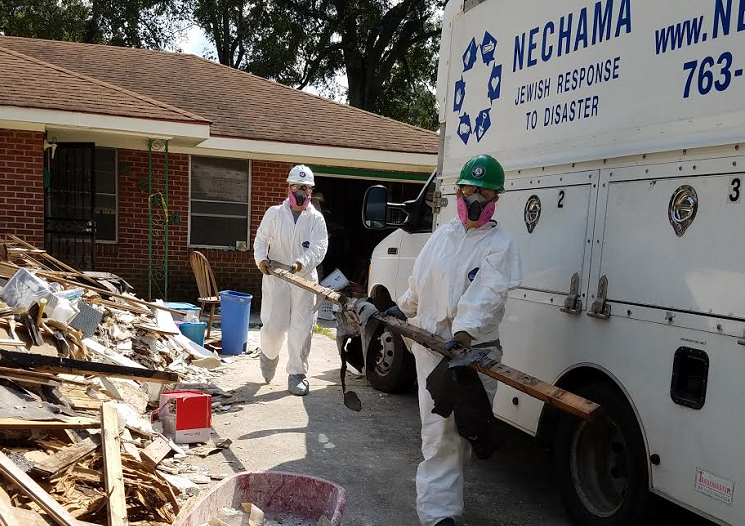 AmeriCorps NCCC centers around environmental conservation and stewardship, urban and rural development, infrastructure improvements, energy conservation, and natural or other disasters. Right out of Corps Member training on August 16, Colleen was deployed leading her team Delta 6 to Baton Rouge, Louisiana for immediate flood relief efforts in assisting with the historic 50 year flooding.

On Friday, August 12th, heavy overnight rains caused local rivers and streams to rise above their banks in the Tangipahoa Parish, sending floodwaters into surrounding towns. In 2 days, between 21.86-31 inches of rain fell in the parishes in and around Baton Rouge, Louisiana. According to the Red Cross, this flood was the worst natural disaster to hit the United States since Hurricane Sandy 4 years ago. 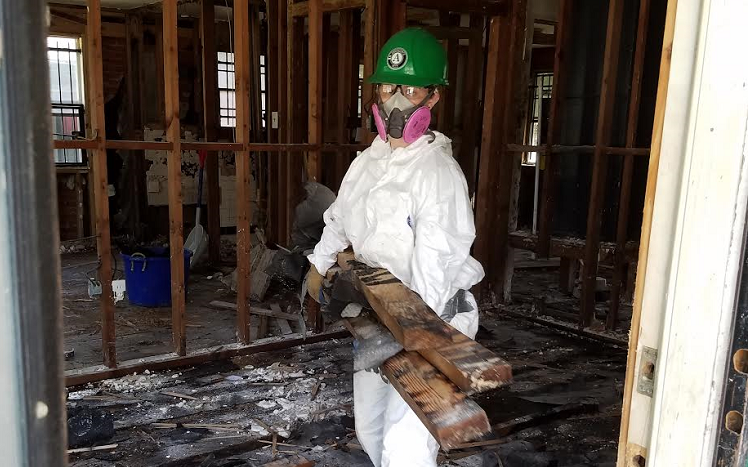 Thousands of community members had not only lost homes, but also personal belongings. Thirteen people died across five parishes, and more rain was in the forecast. President Obama declared at least 20 parishes disaster zones. Families who were able to return home were returning to complete devastation.

Flooding occurred in many areas that were not considered floodplains; therefore, the families that did not have flood insurance and never anticipated anything like this happening, were not covered. Governor John Bel Edwards stated that at least 40,000 homes were damaged;­ it was unclear how many were uninhabitable. As of September 22, 16 146,568 individuals and households have registered with FEMA for assistance, and $665,905,949.91 has been approved to help survivors with temporary rental assistance, essential home repairs, and other serious disaster-related needs.

Colleen has been leading her team and working all sides of disaster relief from logistics in The American Red Cross Headquarters. Colleen quickly begun mapping out the flooding regions using polygon GIS and verifying the flooded zones in real time under the direction of Situation Unit Lead Shawn McCorry and GIS Lead Cliff Hu.

Moving from Red Cross Headquarters to working in the River Center, the largest survivor shelter peaking at housing 2,000 survivors in the state of Louisiana.  Delta 6 had the opportunity to work alongside the Louisiana State Troopers, Louisiana National Guard, Department of Family and Child Services, Veterans Affairs, and countless other organizations. Colleen and her team assisted in monitoring the check in/check out door along with permanently checking out residents, organized and ran the “clothing store” by assisting clients in picking out clothes and later filling out clothing order forms along with restocking the donation station.

Additionally, maintained the hygiene station by handing out toiletries and comfort kits, manned the towels and laundry stations along with assisting in filling out laundry tags and organizing the clean clothes bags everyday. Delta 6 also assisted with the medical staff being a runner completing needed tasks between the arena and expo sides of the River Center.

Switching over to working in warehouse distribution, Delta 6 quickly assembled cleaning kits for survivors to begin their reclamation of their lives filling over 30 box trucks in 3 days. Delta 6 soon hit the road traveling across the Louisiana to begin closing down and switching over survivor shelters from the hands of nonprofit back to the hands of the state. Being 4 weeks in Baton Rouge and still lacking the experience of witnessing the damage, Colleen and her team joined the American Red Cross Emergency Response Vehicle food deliveries serving hot meals to stranded neighborhoods and shortly after they suited up and began the mucking and gutting process. They got a small taste of what mucking and gutting felt like when they joined the efforts on National Day of Service on September 11, having the honor in finishing a veterans home.

Since September 15, Delta 6 focused their efforts in the East Baton Rouge area working at over 20 different addresses mucking and gutting homes affected by flood waters. In 19 days of work, they went to 23 different addresses. During Delta 6’s time in Louisiana, the team mucked and gutted alongside NECHAMA, a Jewish Disaster Relief Team, assisting over 50 survivors. With every location having different needs, each Corps Member assisted with many tasks including clearing out personal items, removing trim and drywall, and taking out ceilings, hardwood flooring, and assorted appliances.

As a group, Delta 6 - along with other NECHAMA volunteers - were able to complete work in a matter of hours that would take homeowners days to do on their own.  Delta 6 cleared over 36,000 pounds of debris and successfully completed 20 homes. Damage assessments were conducted via walkthroughs by Delta 6 Team Leader Colleen Roach. Wellness and safety checks were conducted on a regular basis by a Corps Member assigned to decontamination.

Going on the third month of disaster relief and recovery, Colleen and her team is stationed back in Louisiana until mid November, where they are continuing gutting homes, started the mold suppression process, and conducting pop-up mobile distribution sites. But, being in AmeriCorps means being redeployed at a moments notice, Delta 6 is currently on standby to being moved to North Carolina to assist in the recovery of Hurricane Matthew. Until then, the plan remains that they will be deployed to Aiken, South Carolina in mid November to work at Gravatt Camp and Conference Center assisting in the construction of farm and garden classrooms, a labyrinth, cabin roofing and painting, as well as, planning the annual Christmas retreat for military families. 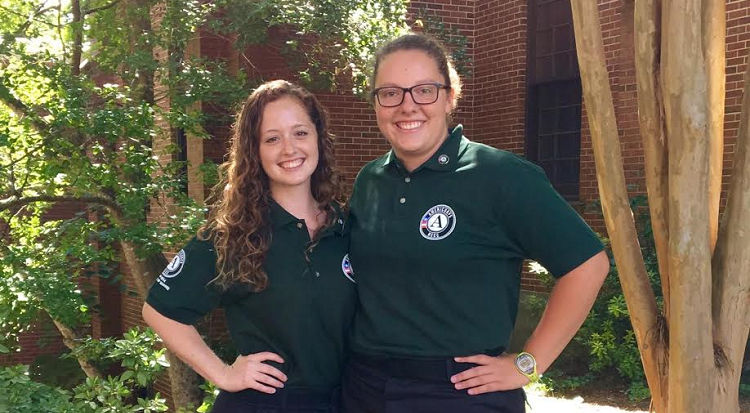 Pictured: Colleen is in her formal AmeriTux with her best friend Kelsey Tucker after being formally initiated into the AmeriCorps NCCC Program as Team Leaders. Photo courtesy of AmeriCorp NCCC.

Colleen Roach serves as the Team Leader for Delta 6. She is in charge of leading Delta 6 through the AmeriCorps NCCC Class 23 year. She is tasked with delegating tasks, assigning specialty roles to her team, managing budgets, filling out paperwork, conducting wellness checks and worksite walkthroughs, creating schedules, serving as the point of contact on the worksites, and assuring respect and fair treatment from all sponsors and teammates.