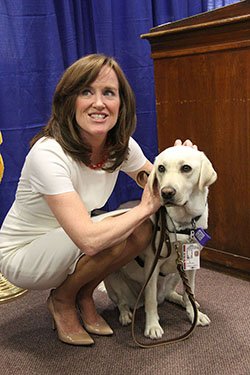 Mega, who works for a salary of treats, belly-rubs and walks, and is cared for by specially trained members of DA Rice’s Special Victims Bureau, was provided free of charge by Canine Companions for Independence. Canine Companions is a national organization whose Northeast headquarters is based in Medford and that trains both dogs and their handlers in assisting in stressful scenarios for victims and witnesses – especially children – such as those frequently faced in a prosecutor’s office.

“It’s incredibly difficult to make successful prosecutions without the testimony of victims and witnesses, and particularly harder in cases involving the abuse of children,” DA Rice said.  “Mega is a highly trained facility dog who’s already started her work in helping vulnerable and scared victims and witnesses open up about horrific events in the daunting surroundings of a prosecutor’s office.  At no cost to taxpayers, we’re grateful to have this service from Canine Companions.”

“Courthouse placements are new and innovative. More and more jurisdictions are exploring and applying for Canine Companions Facility dogs for their courthouses,” said Canine Companions Northeast Regional Executive Director Debra Dougherty.  “These placements are exemplary of the animal-human bond mostly because animals are non-judgmental, live in the moment and are always happy to have that human companionship. We look forward to hearing about the many successes Mega will have in helping a victim testify in court about a painful incident.”

Mega’s first day on the job at DA Rice’s office was Nov. 10 and she has already met with two victims – a young girl and an adult woman, both victims of sex crimes.  Mega is available in the office every day to assist victims and witnesses and will be available to any bureau in the office.  Her progress will be monitored closely and evaluated for her possible use in grand jury and trial environments, with the proper protections and permissions.

Mega is one of just two Canine Companion facility dogs in a district attorney’s office in New York State – the other is Bronksey in Staten Island.  There are no other such facility dogs believed to be in law enforcement service on Long Island.

Unlike “comfort dogs” or “therapy dogs,” which aren’t certified by guidelines from the Americans with Disabilities Act, the professional facility dogs provided by Canine Companions undergo six months of advanced training with nationally renowned instructors, learning more than 50 commands that help the dogs assist people with disabilities and anyone else in professional environments like offices.  The dogs are paired up, based on their personalities, with specific handlers, who themselves undergo two weeks of training.  Canine Companions dogs – Labrador Retrievers, Golden Retrievers and crosses between the two – are bred by Canine Companions and then adopted by volunteer puppy raisers, who teach them basic commands and socialization skills before returning them for training at about age 1-1/2.

Mega’s services are at no cost to taxpayers, she being provided free of charge by Canine Companions through private donations to the organization.  Food and veterinary care for Mega – who is checked and recertified periodically by Canine Companions – are paid for with forfeitures from criminal cases, which are set aside for law enforcement use.  While Canine Companions retains ownership of Mega, she is cared for and taken home nightly by ADA Amanda Burke of DA Rice’s Special Victims Bureau.

Canine Companions for Independence is the largest non-profit provider of trained assistance dogs with five regional training centers across the country. Established in 1975, Canine Companions provides highly trained assistance dogs to children and adults with disabilities and is recognized worldwide for the excellence of its dogs, and quality and longevity of the matches it makes between dogs and people. Canine Companions provides dogs to hospitals, individuals with disabilities, wounded veterans, and the criminal justice system.