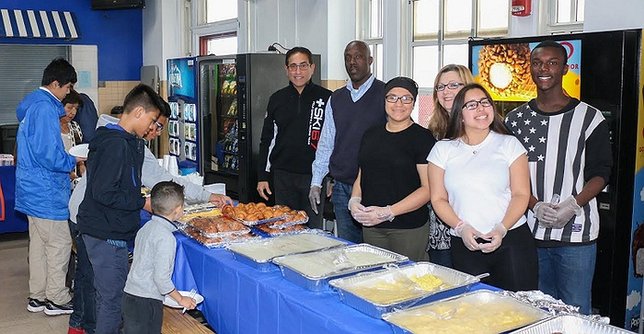 Amber Birchwell is pictured with her coach, Matthew Sanders. 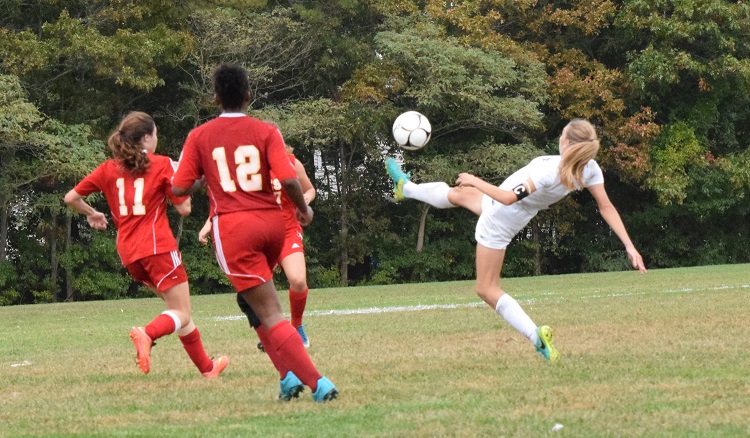 Pictured: Amber Birchwell completes a bicycle kick in a playoff victory over Half Hollow Hills West. Photo courtesy of WFSD.

Amber was a force to be reckoned with on the field, as she led Suffolk County Large Schools in scoring for the second consecutive year with 27 goals and six assists en route to an 8-5 regular season League I record for the Colonials and the program’s first-ever playoff victory. It was also the soccer team’s first time back in the playoffs since 2008.

Amber has achieved many accolades throughout her four-year varsity career including earning All-League honors during her freshman year when the program participated in the Developmental League. The program rejoined League I in her sophomore year when she earned All-County status. In her junior year, Amber led the league in scoring with 15 goals and four assists, achieving All-Long Island and All-State honors. She is expected to earn All-Long Island, All-State and All-Regional honors for her senior season when the awards are announced next month.

“Some athletes may have been satisfied or even overjoyed by these accolades, but not Amber,” said Coach Matthew Sanders. “She set even higher goals for her senior season – helping her team win a playoff game for the first time in school history and becoming the Suffolk County Player of the Year – both of which she achieved.”

Coach Sanders added, “I have witnessed her ability and competitiveness in a number of diverse and challenging situations. Her physical performance, competitiveness and leadership were invaluable factors in our team’s qualification for the playoffs and first-ever playoff victory. It was both a privilege and honor to coach a once-in-a-lifetime player like Amber.”

Birchwell was also named among the “Top 50 Girls Soccer Players on Long Island” by Newsday, was placed on the “All-American Watch List” by Top Drawer Soccer and had the honor of training with the U.S. Youth Soccer Olympic Development Program for 10 days in Spain last year. She will bring her talents to Providence College in the fall of 2017.