SantaCon participants are at the top of the NYPD's naughty list this year as the police attempt to eradicate the presence of drunken revelers. 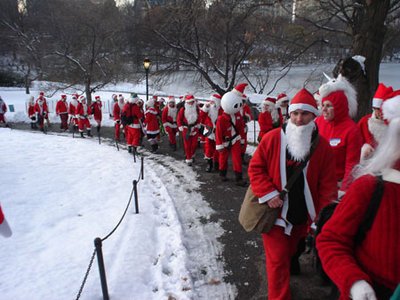 SantaCon participants are not full of jolly cheer after hearing a recent call by the NYPD to shut down the seasonal celebration that is often marked by drunken Santas filling New York City streets.

SantaCon is a Santa Claus Convention that occurs annually in New York City, where thousands of men and women of all ages and religions descend upon Manhattan to donate food or money to charities.  It is a "charitable, non-commercial, non-political, nonsensical Santa Claus convention that happens once a year for absolutely no reason," the group states on their website.

This celebration often includes bar crawls, with some Santas taking the partying too far.

For that reason, NYPD Liutenant John Cocchi wrote a letter to bar owners requesting that at this year's SantaCon on December 14, they not let SantaCon participants drink at their establishments.

"The number of participants has grown large enough to completely overwhelm the sidewalks and public spaces..." said Cocchi in the letter, according to USA Today.  "Having thousands of intoxicated partygoers roam the streets urinating, littering, vomiting and vandalizing will not be tolerated in our neighborhood."

The SantaCon Code states "Santa spreads JOY. Not terror. Not vomit. Not trash. Would you want those under YOUR tree?" and "Santa stays safe. Santa does not drink more than Santa can handle. Doing so endangers Santa's self, Santa's friends, and the future of SantaCon."

Last year, an estimated 30,000 people attended SantaCon in NYC.  The group raised thousands of dollars for Toys for Tots, and also collected thousands of pounds of non-perishable food items for food banks in Manhattan and Brooklyn.