Kaleigh Sidaras finished her first season at the helm with a 9-6-1 overall record. 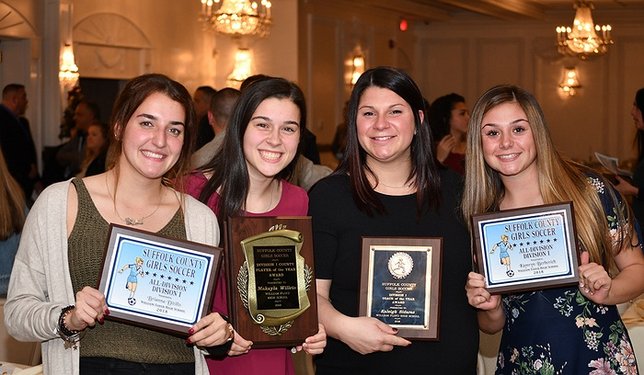 Holbrook, NY - November 21, 2018 - Kaleigh Sidaras, rookie head coach for the William Floyd Colonials girls’ varsity soccer team, was announced as the Suffolk County Girls Soccer Coaches Association (SCGSCA) League AA “Coach of the Year” at the SCGSCA Awards Dinner held on November 19 at Villa Lombardi’s in Holbrook. Sidaras, who served as an assistant coach for the team last year, finished her first season at the helm with a 9-6-1 overall record (8-5-1 league record), falling one spot short of making the playoffs despite an excellent .563 winning percentage.
The transition from assistant to head coach was somewhat smooth for Sidaras, given the relationships she developed with the student-athletes as an assistant coach and her knowledge of the system.
“The one transition that I truly struggled with was the understanding that things don't change overnight,” said Sidaras. “I consider myself a very competitive person who doesn't take losing well.” She added that building a successful program that will last long term is a process; and everyone involved – youth camps, middle school, junior varsity and varsity – must buy in to the vision.
A point of emphasis from day one for Sidaras was building a “family” culture among the players and coaching staff and that it was important for the veteran players to lead that effort. “Getting the younger players and new varsity players to feel that same attachment to the game and the program can be difficult. The mindset that I was instilling every day was, ‘whatever we do, we do it together,’” she said.
“With the help of some tremendous student-athletes who are leaders on and off the field, as well as my coaching staff which was the primary reason I was able to succeed in my goals this year, I truly feel like we created a ‘family’ environment on this team,” said Sidaras. “The connections the girls made this year and their ability to work together each and every day was something that a coach doesn't always get to witness. This was a big part of our success as a team and these student-athletes have left some big shoes to fill for years to come.”
Sidaras says that she will look back on her first year as varsity head coach fondly. Despite a few moments and games that she wished turned out differently, overall it was a good season. She is proud of her team, the coaching staff and the overall program as it continues to make strides. A large school championship in summer league, a 9-6-1 overall record and “Coach of the Year” honors will be tough to top in year two. However, Coach Sidaras is already looking forward to the challenges that next year will bring including replacing the seniors who will graduate and keeping that family culture going.
The 2019 girls’ varsity soccer team will lose seven key players to graduation, goalkeeper Makayla Willets, Brianna Ditillo, Heather Strong, Bella Iadanza, Melany Pagan-Rosario, Danielle Zacher and Haley Cruz. “We have some underclassmen who I know will step up to the challenge and become the next set of leaders. It will be their job and responsibility to help the new members of our family buy in,” she said.
There is no doubt in Sidaras’s mind that they will eventually achieve the ultimate goal of winning a championship if the program continues along this upward trajectory. “I am excited to be part of this program; I am blessed to have the best staff around; and I'm eager to see where we can go from here.”
Also recognized at the SCGSCA Awards Dinner were Cristopher O’ Gorman, the first year head coach for the junior varsity Colonials, who took home “Coach of the Year” honors for his efforts with the JV squad. Senior Makayla Willets earned “Goalkeeper of the Year” along with All-State and All-County accolades. Senior Brianna Ditillo and junior Kamryn Berberich earned All-Division honors.