Book not only covers buying and selling, but also learning about art and art history.

Dr. Harvey Manes is the author of "Collecting Art for Pleasure and Profit."

Long Island, NY - November 21, 2018 - Dr. Harvey Manes is an orthopedic surgeon with a degree from SUNY Downstate College of Medicine and holds a law degree from Hofstra Law School. In addition, Dr. Manes – an Old Westbury resident – is also a passionate art collector and historian, and sits on the board of the Nassau County Museum of Art.
To add to his already impressive list of accomplishments, Dr. Manes is also a prolific writer; his new book, Collecting Art for Pleasure and Profit, represents his 10th published work thus far. Previous tomes authored by Dr. Manes cover a wide and diverse array of topics, from the medical field and physical therapy to politics and the Nobel Peace Prize; clearly, as an author, Dr. Manes is a true jack-of-all-trades.
Growing up in a very modest area of Brooklyn, Dr. Manes grew interested in art at an early age; while none of his childhood friends were interested in visiting museums, he often went with his father on the weekends to marvel at the works of the masters. It was something that would influence him for the rest of his life, he said.
“My father would take me to the Brooklyn Museum, and it was wonderful! Fascinating! I loved it, so when I went to college I studied art history,” he said. “As a pre-med student I took calculus and physics and chemistry and all of those science courses, but my favorite course was always art history. Eventually I went on to visit a lot of the major museums in New York and in Europe, and I started buying art from auction houses and galleries when I started making money as a doctor.”
Dr. Manes noted that when he first started collecting 30 or 40 years ago, the marketplace for art was very different then it is today; prices, while still high, were actually far more reasonable, allowing him to amass a significant and varied collection representing the work of artists such as Picasso, Warhol, and others for a fraction of what they're worth today.
“The prices today are just insane, and they keep going up...every year I go to the auctions and I’ll see a high asking price and think it will never sell for that amount, but then it sells for even more!” he said. “One of the reasons for this is that there are more museums, as well as private individuals, that are buying art now.”
Throughout the years Dr. Manes has acquired a very large collection of work that he lovingly displays throughout his three homes. However, in keeping with his philanthropic nature, he notes that he has no desire to horde all of these beautiful creations simply for his own edification; indeed, he frequently loans various pieces out to a variety of different museums, including the Nassau County Museum of Art, where he is currently a Trustee.
“A lot of museums borrow pieces from me for their shows, and I have so many different pieces that fit into so many different types of shows,” he said. “For example, the Nassau County Museum of Art’s previous show was called 'Colors,' and they had about six of my pieces on display there. The show that they currently have running is called 'Wild Kingdom,' and they have over ten of my pieces. In addition, I've also lent pieces to the Chicago Museum of Art, the L.A. Museum of Art, the Jewish Museum...I feel you only own art temporarily, and we're all just saving and taking care of it for the next generation.” 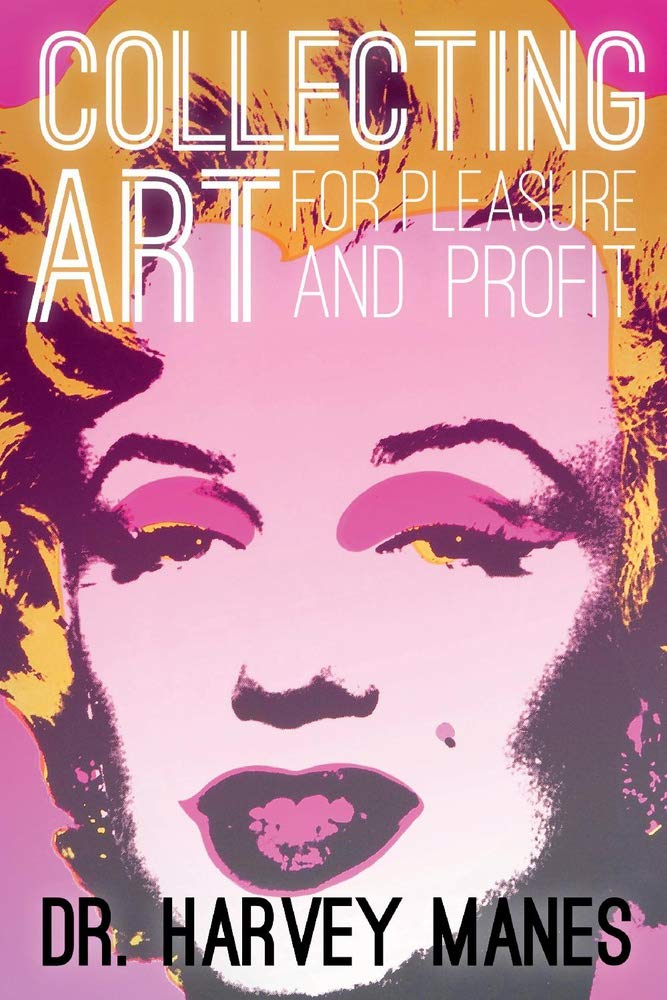 Photo Credit: Dr. Harvey Manes
Given his many years of experience in collecting and researching art, Dr. Manes decided that it was finally time to add to his growing body of literary work by writing a book about his most beloved and cherished pastime. Thus, we come to the publication of Collecting Art for Pleasure and Profit, available as of November 19th through Amazon.com. The book offers an engaging and personal account by Dr. Manes, covering many aspects of buying and selling artwork, as well as a good dose of the history behind many of his favorite pieces as well.
“I have so much experience, and I have so many anecdotal stories about auctions and galleries and when and how to buy,” he said. “For somebody that wants to start a collection, or even has a collection but wants to get a little more insight into buying and investing, I have that knowledge and it's my duty to put it in writing in order to help people.”
Proceeds from the sales of Collecting Art for Pleasure and Profit will be going to the Manes Peace Prize Foundation, an organization founded by Dr. Manes that donates funds to charities, individuals and organizations that promote peace through art and education, as well as the Manes Art Foundation, which loans pieces of his collection to various museums.
When it comes to viewing art as a potential money-making opportunity, Dr. Manes notes that buying the right pieces by the right artist at the right time can offer a more sound investment than even the stock market, believe it or not.
“Some artists are hot, and some are not. Some artists will increase in value, and some are overpriced. In my book I discuss when to buy in an auction, when the buy at a gallery, how to deal with art fairs, while taking those things into account,” he said. “In my book, I show through numerous graphs and charts chronicling a 50 year period that, when compared to bonds, stocks, and real estate, the value of art holds up very, very well.”
“As a matter of fact, the only time during that 50 year period where art went down was during the 1980s when the Japanese economy was booming and they were buying up art like crazy,” Dr. Manes continued. “Then eventually the Japanese economy crashed and they started dumping some of that art, and the art on the market started going down in the 1990s. That's when I picked up a lot of pieces. But that was pretty much the only time that I know of that the art market has gone down in general.”
However, spending your money wantonly and without purpose when it comes to investing in art is an unwise decision, Dr. Manes said.
“There are some areas that are better investments than others...for instance, Impressionists used to be hot 20 or 30 years ago, but they are moving much more slowly now than the Contemporary art market,” he said. “Modern art tends to increase anywhere from 10 to 20 percent per year over the past five or ten years, so if you want to put your money into art as an investment, buy some Contemporary art.”
But Collecting Art for Pleasure and Profit isn't merely about dollars and cents; Dr. Manes also expresses his love and appreciation for the rich history of art throughout the ages as well.
“I discuss different styles of art…the Masters and the Impressionists, all the way up to the present day,” he said. “And I give a little background on many of the great artists...where they come from, the kind of art they created… it's not just about buying and selling, my book is also about learning about art and art history.”
Dr. Manes has also dabbled in creating artwork himself, fancying himself a sculptor in mediums such as stone and clay; he's even held several exhibitions of his work, with the attendees coming away quite impressed by his offerings.
While it's too close to the publication of this book for Dr. Manes to be already contemplating what kind of tome he may author next, he is more than sure yet another one will come sooner rather than later.
“Something else will pop up, I'm sure,” he said.
To order Dr. Harvey Manes’ Collecting Art for Pleasure and Profit from Amazon.com, please click here.