Traffic Incident Management (TIM) experts tell us that drivers are not aware of the laws in their states, especially “Move Over and Slow Down” laws and others similar in purpose. 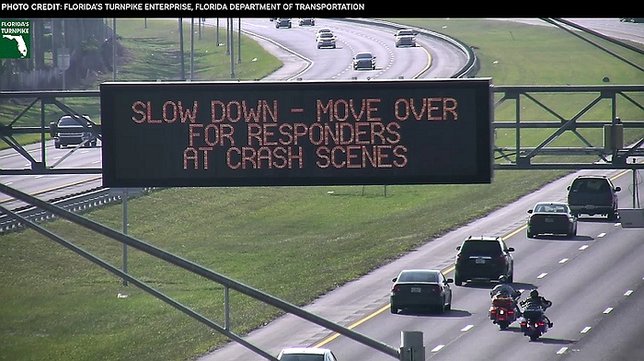 With an increasing number of vehicles miles traveled and incidents to respond, it is imperative that we work together to ensure that our emergency responders are able to do their jobs.

Why is this so important?

According to data released earlier this year by the National Highway Traffic Safety Administration, 35,092 people – someone’s daughter, son, co-worker and neighbor -- died on our nation’s highways in motor vehicle traffic crashes in 2015. The figure represents a 7.2% increase over 2014, which makes it the greatest one year increase in 50 years, and breaks a recent historical trend of fewer deaths occurring per year. With an increasing number of vehicles miles traveled and incidents to respond, it is imperative that we work together to ensure that our emergency responders are able to do their jobs.

Traffic Incident Management (TIM) experts tell us that drivers are not aware of the laws in their states, especially “Move Over and Slow Down” laws and others similar in purpose.  And the disciplines that suffer the most from this ignorance are our safety service patrols, tow truck operators, transportation or public works maintenance crews, fire and rescue personnel and law enforcement officials.

Over the next year, FHWA, first responders and other key partners across the country will lay the groundwork to remedy this, culminating with the inaugural National Traffic Incident Response Week.  Ideally, by this time next year, responders, community leaders and preparedness organizations will have used the week to prepare drivers and their local public safety professionals to take safe actions and prevent responder, driver or passenger deaths.  Police, fire and rescue, safety service patrols, emergency medical professionals, towers, and public works and transportation crews will talk to communities about dangers that kill drivers, passengers, pedestrians, and those who rush to their help.

FHWA selected the week of November 13-17, in part, because it coincides with USDOT and FHWA campaigns running the same time that remind travelers to be especially safe during the holiday season by driving sober and without distraction, using seatbelts, and being aware of your surroundings as you walk, bike or drive on our roads.

Several states are conducting events this month to raise awareness and prepare for National Traffic Incident Response Week.  State DOTs in Iowa and Missouri are hosting Ride-a-Long events in conjunction with Safety Service Patrols and law enforcement agencies to show the public what happens at incident scenes and what to when a driver encounters roadway operations geared to clear an accident. Florida has developed slogans for its Variable Message Signs and is showing videos at rest stops throughout the state illustrating motorist responsibilities when approaching a crash scene.

Nationwide, the National TIM Network has formed a working group at FHWA’s request and is providing links to safety statistics, PSAs, a training video developed by the International Association of Chiefs of Police and FHWA.  You can find all this, and other resources online.

One of the most effective ways to reduce fatalities on our nation’s roads is by getting to those seriously injured in accidents as quickly as possible. Before, during and after the first annual National Traffic Incident Response Week, we hope you will join us in spreading the word and taking part in our collective efforts to make travel near or at a crash site safer for everyone.