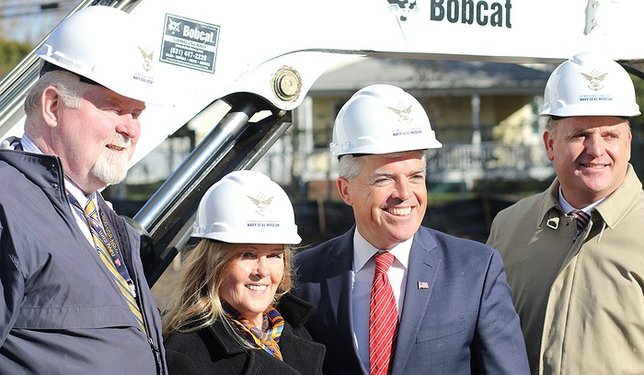 Suffolk County, NY - November 20, 2018 - Suffolk County Executive Steve Bellone and Legislator Bill Lindsay today announced a $300,000 grant from the Robert Gardiner Foundation as part of a groundbreaking ceremony for the LT. Michael P. Murphy Navy SEAL Museum and Sea Cadet Training Facility, the first U.S. Navy SEAL Museum in the Northeast.
The ceremony featured a presentation by the Gardiner Foundation, who announced that the museum has been awarded a $300,000 grant and presented the museum trustees with a check. This funding comes on the heels of a Dormitory Authority of the State of New York (DASNY) grant from Governor Cuomo originally secured by Senator Tom Croci for $400,000.
Maureen Murphy, Gold Star mother of the Navy Seal Museum’s namesake Michael P. Murphy, boarded an excavator to dig the ceremonial first bucket of dirt for the foundation of the museum.
“LT Michael Murphy represents so much about who we are as a county, as a country, and who we aspire to be as a people,” said County Executive Bellone. “He symbolizes service, honor, and sacrifice. This museum will sit not only as a monument to LT Murphy, but act as a roadmap both of where the US Navy SEALs came from, but in the training facility for Sea Cadets, as a roadmap to lead the pathway for future Michael Murphys.”
Suffolk County Legislator William Lindsay III said, “It has been amazing to see the progress and support for the construction of this historic museum,” said Legislator William J. Lindsay III.  “The Murphy family along with the board members have worked tirelessly to bring this dream to reality.  When this museum is complete, I believe it will serve as a proud reminder of the sacrifices LT Michael P. Murphy made, as well as so many other men and women that have served our Country.  I look forward to watching the building rise, starting today.”
Dan Murphy, Gold Star parent of LT Michael P. Murphy, said, “This museum is not only important to me. This has been a community effort and that’s what touches my heart. The people who helped make this museum possible are the people who recognized Michael’s service and sacrifice.”
Tom Ronayne, Director of Suffolk County Veterans Services, said, “Our veterans serve as the backbone of Suffolk County. LT. Michael P. Murphy truly exemplifies the service and sacrifice that marks who they are. I couldn’t be more proud that Suffolk County will be the home of the first US Navy SEAL museum in the Northeast.”
Vincent Calvosa, Director of Construction for the Michael P. Murphy US Navy SEAL Museum, said, “Being involved in this has been the most honorable thing I could think of that could happen in a person’s career. A Navy SEAL Museum being built right here in West Sayville, NY is amazing. Failure was not option.”
The proposed state-of-the-art facility will be constructed on the property of Charles P. Dominy Park in West Sayville. The museum will be built, and utilized in honor, and memory of LT Michael P. Murphy, a graduate of Patchogue Medford High School (Class of ’94), and Pennsylvania State University (Class of ’98).  After completion of his college degree, he worked diligently to become a Navy SEAL; after years of hard work and dedication he was bestowed the honor of United States Navy SEAL Lieutenant.  LT Murphy lost his life on June 28, 2005, while serving in Afghanistan.  For his actions, bravery, and valor, he was posthumously awarded the Purple Heart, as well as the Medal of Honor, which quite notably made him the first member of the Navy to receive the award since the Vietnam War. The Museum is due to open November 2019.
The classroom of the museum will serve as a learning center for the LT Michael P. Murphy Division of the United States Naval Sea Cadet Corps. They will continue to honor LT Murphy’s legacy by offering nautically oriented training for children between the ages of 10 and 17.  They also provide education pertaining to basic seamanship and seagoing skills, and also instill a sense of patriotism and self-reliance.