Mention was recently discovered in 1759 diary at Raynham Hall Museum in Oyster Bay. 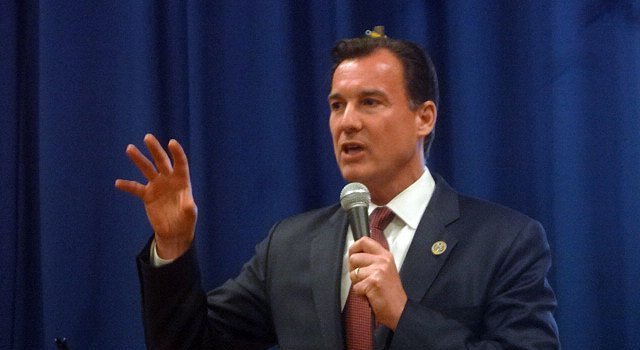 Huntington, NY - November 19, 2018 - On Wednesday, Congressman Tom Suozzi (D – Long Island, Queens) will visit Raynham Hall Museum in Oyster Bay to meet with historian Claire Bellerjeau, who recently discovered the earliest known mention of Thanksgiving in New York State, held on Thursday, November 22, 1759.
Bellerjeau, who is the Director of Education at the museum, discovered the hand-written account inside an unpublished diary of Zachariah Weekes, who was the schoolmaster in Oyster Bay during the 1750s - 1770s. The entry, written on Sunday, November 25th, 1759, reads in part, "...Last Thursday being a day set apart by our Governor for publick Thanksgiving for the Success of his Majesties Forces in America..."
“Most scholars recognize the three-day feast held in October of 1621 by Pilgrims at Plymouth, Massachusetts as the first Thanksgiving. The next two earliest records, one in July of 1630 and the next in November of 1775, both took place in Massachusetts.  Later known observances were for the colonies as a whole,” said Bellerjeau.
“The significance of the earliest known celebration of Thanksgiving in New York State, 259 years ago to the day from this year’s celebration should not go unrecognized. This is a fascinating discovery and I thank the staff at Raynham Hall Museum for sharing it with me,” said Suozzi.
Congressman Suozzi will meet with Claire Bellerjeau, and the staff of Raynham Hall Museum, to view and discuss the diary, which will remain on display at the museum through Thanksgiving weekend.