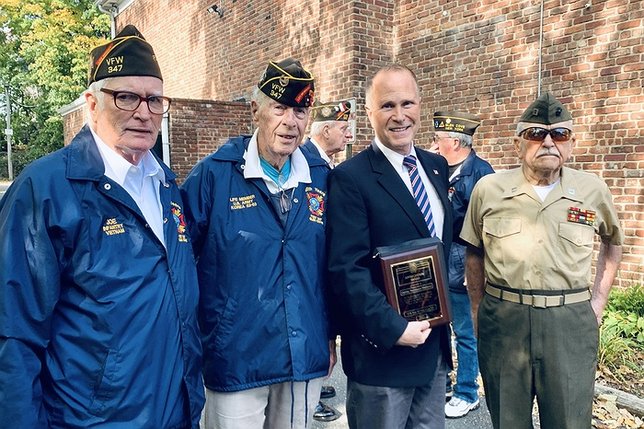 This past Veterans Day, Glen Cove VFW Post 347 members surprised Councilman Gaitley Stevenson-Mathews during their members ceremony at their hall with a plaque honoring him for his meritorious and distinguished service to their post.

Photo by: Office of Councilman Stevenson-Mathews

Each Veterans Day, the members of VFW Post 347 in Glen Cove are honored for their bravery and dedication for their years of service fighting for our freedoms. The Post hosts a public service at the Doughboy Monument and prior to the public ceremony they host their own members’ event at their Post on Hill Street. During recent years, Councilman Gaitley Stevenson-Mathews has been invited to join the veterans for their ceremonies.  This year, he arrived at the Post’s member ceremony with “I’m Proud to be a Veteran'' lapel pins, which he distributed to each member present. Yet, in a surprise twist, prior to the start of their standard service, it was the Councilman who was celebrated. The VFW members surprised Stevenson-Mathews with a plaque honoring him for his meritorious and distinguished service to their post. “I was truly surprised and humbled to be presented with such an important and distinguished honor,” said Stevenson-Mathews. “To be acknowledged by veterans, who sacrificed so much in their own lifetimes is a true honor and will be something I will always cherish.”
VFW member and trustee Joseph Moores, who presented Gaitley with the award, explained that “Gaitley has been a tremendous help to all veterans, especially our VFW Post 347. He usually attends breakfast each month at St. Rocco’s with American Legion Post 76, he touches base with us before important meetings to ensure our voice will be heard and recently he set up a VFW Facebook page for us, so that we can share important veterans’ announcements with the community.  During our recent emergency, when our Post caught on fire in the early morning hours, Gaitley was one of the first to arrive and offer assistance. Our Facebook page, which Gaitley manages with input from a designated member, allowed us to petition vital support and funds to help rebuild our post. Gaitley is a loyal friend and we wanted everyone to know how much we appreciate him.”
Former Commander Ben Farnan added “After the fire, it would have been easy to lose hope, but Gaitley was right there with us, getting the word out and encouraging the community to help and guide us through this tragedy.  We will forever be thankful.” Post Commander Henryk Nowicki also commented, “It was only natural that we honor Gaitley on the day that means so much to us.”
A longtime supporter of veteran initiatives, Stevenson-Mathews comes from a military family and was raised with a strong sense of civic duty, faith, and commitment to community. His brother, retired Colonel J. Hunter Mathews, served two tours of duty in Afghanistan. His father served in the Navy (WWII), and his mother served in the Cadet Nurse Corps (WWII).  Stevenson-Mathews also has a nephew who served as an army combat medic. “I knew Gaitley’s parents,” said former Army Capt. Julia McManus Love “It is no surprise to me that Gaitley is as committed to the community as he is. He was certainly raised with a strong sense of the importance of serving others.”
Stevenson-Mathews has a long history of community service and is committed to helping those within his community as demonstrated by his involvement and leadership in many organizations. “Knowing that a dedicated community leader like Gaitley serves our town and has so much commitment to our veterans makes me truly proud to be a resident here,” said Eva Casale, founder of Team E.V.A., a nonprofit organization which supports ongoing veterans and active military members and their families. “Together, we can rebuild the VFW and remind our local veterans how much their honor and bravery matters to us each and every day.”
While the renovations of VFW Post 347 will hopefully begin soon and some financial support will be available via insurance, additional funding is still needed to build back the hall and make some much needed improvements. The public is invited to support the Post by making financial contributions.  Checks can be made payable to VFW Post 347 and mailed to James E. Donahue Post 347, 15 Hill St., Glen Cove, NY 11542. The VFW is a non-profit organization. Donations are tax-deductible as allowed by law.
For VFW Post 347 information, please go to www.facebook.com/vfwpost347.