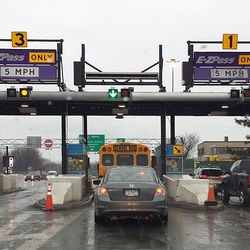 Albany, NY - November 17, 2015 - Governor Andrew M. Cuomo today announced a new proposed regulation that takes action against motorists who persistently evade the payment of tolls and fees. Under the new proposal, the New York State Department of Motor Vehicles will suspend the registration of motorists who fail to pay five tolls, fees, and other charges resulting from violations on different days, within a period of 18 months, and ignore toll authorities' repeated notices. Persistent violators will be required to pay the tolls and fees, or to have the charges dismissed, in order to prevent the suspension of their registrations or in order for their registrations to be reinstated.

"Toll evaders unfairly burden hard working New Yorkers who play by the rules and put additional stress on this state's transportation network," Governor Cuomo said. "This new action cracks down on this unacceptable behavior and will keep these scofflaws off the very roads they fail to pay their fair share to maintain."

New York’s tolling authorities -- including the New York State Thruway Authority, the Port Authority of New York and New Jersey, the New York State Bridge Authority and the Triborough Bridge and Tunnel Authority -- report that non-payment of tolls, even with violation notices being sent, is a persistent challenge. The authorities found nearly 35,000 cases where violators accrued five or more unpaid toll violations within an 18-month period, resulting in about $16.5 million in lost revenue annually, passing the burden of maintaining infrastructure and supporting mass transit to motorists who obey the law and pay the tolls.

Tolling authorities will send violators notices for each toll violation, advising them of the amount owed, how to pay, and how to dispute the alleged violation. If the violator fails to pay the tolls, fees or other charges, or have such tolls, fees or charges dismissed or transferred in response to the multiple notices, the tolling authority will refer the violator to DMV.

“New York State Vehicle and Traffic Law gives DMV the authority to suspend registrations for habitual and persistent violations of the law, and it’s safe to say that motorists who fail to pay five toll violations within 18 months fall within this category,” said DMV Executive Deputy Commissioner Terri Egan. “DMV will work with its tolling authority partners to ensure that scofflaws are being held accountable for their actions, which place an unfair burden on New Yorkers who respect the law and pay their tolls.”

The new toll regulations will appear in the November 18, 2015 State Register, at which time, a 45-day public comment period begins. The period ends January 4, 2016. All comments received will be taken into consideration before the regulations are formally adopted and implemented soon thereafter.