LaGuardia to Receive $37 Million in Aid for Flood Prevention Measures

To keep essential services from going underwater as they did during Hurricane Sandy, Cuomo announced the plan to send $37.5 million in funding on five projects to prevent flooding at the airport. 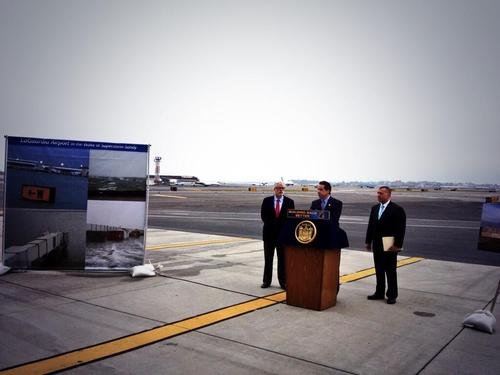 LaGuardia Airport will join the multitude of infrastructures across Long Island that are being rebuilt better and stronger to withstand future storms.

Governor Andrew Cuomo announced Sunday morning that LaGuardia will receive $37.5 million in federal and state funds for five projects that will protect the airport from storms like Hurricane Sandy. About $28 million of the funding will come from the federal funds that were awarded to the Port Authority of New York and New Jersey.

According to Governor Cuomo, about 100 million gallons of water flooded the airport during the superstorm, and that floodwater in the pump houses made them unusable.  The airport was closed for a total of three days, which caused

"Forty million dollars is a lot of money at a time when the economy is slow and the budget is tight," Cuomo said in a press conference on Sunday. "But think of it this way: One day of lost service at the airport costs New York about $54 million."

The projects will include installing flood barrier berms, as well as concrete floodwalls and gravity drains.  The airport’s generators will also be replaced and further work will be done to protect its power distribution grid.

"Our goal is not to rebuild what was from Hurricane Sandy. Our goal is to build back better than before, to learn from what we went through, see where the damage was and rebuild in a way that will reduce the damage the next time there is an extreme weather circumstance," Cuomo said. "And we're doing that all across the board."