The annual charity game is about teaching the girls to give to others, spread kindness and give back. 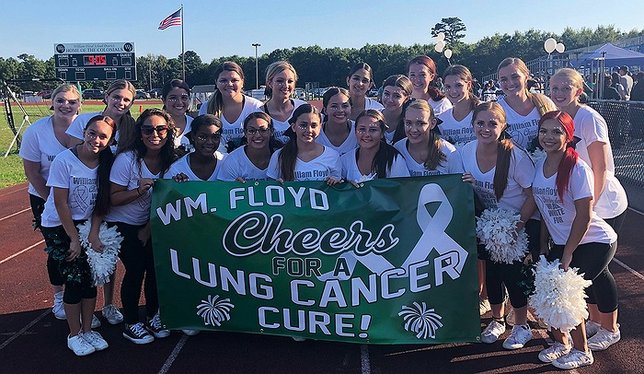 Mastic Beach, NY - November 16, 2018 - The William Floyd High School cheerleading program recently held their third annual charity game resulting in $1,000 raised for this year’s chosen charity – the Stony Brook University Lung Cancer Center. The team selected this charity as two of the student-athletes have family members battling this terrible disease. To date, the cheerleading team has raised more than $3,500 combined in the three charity games supporting various causes including the fight against Rett Syndrome and breast cancer.
“The annual charity game is about teaching the girls to give to others, spread kindness and give back,” said head coach Alyssa Cabrera. In addition to the charity game, the team also recently visited the Bay Area Head Start to spend some time with the children and, to the children’s joy, participate in various stunts with them. They have also volunteered the past few summers assisting the William Floyd Alumni Association in assembling school supply packets for incoming kindergarten students.
The cheerleading program plans on entering the “Team Up 4 Community” challenge for the third consecutive year, a program started by former New York Islander player Steve Webb which promotes and rewards schools and teams for their community service efforts. With the help of the William Floyd community in an online voting contest, the cheerleaders took first- and second-place in subsequent years, resulting in grants for the program totaling $4,500. The contest will begin in December with online voting.
Coach Cabrera added her thanks to East End Screen Printing for donating the charity game t-shirts, as well as to team parents for pitching in to make a difference.