DA Sini: Man Arrested for Alleged Welfare Fraud for Receiving in Excess of $200,000 in Medicaid Benefits

Mohammad Iqbal of Coram, 53, faces a maximum sentence of seven and a half to 15 years in prison, Sini says. 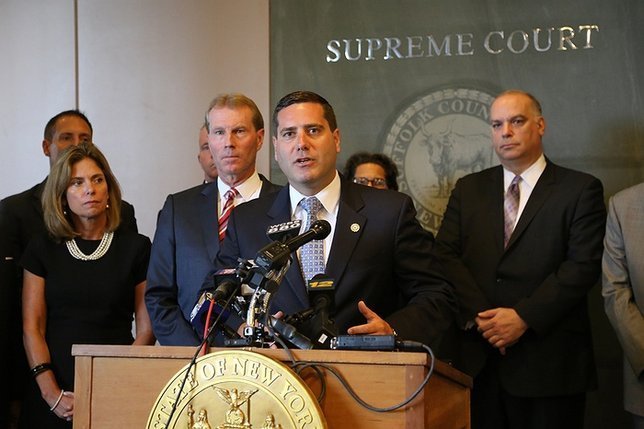 Central Islip, NY - November 16, 2018 - Suffolk County District Attorney Timothy D. Sini today announced the arrest of a man for allegedly receiving in excess of $200,000 in Medicaid benefits to which he was not entitled.
“For almost eight years, the defendant misrepresented his income to the Suffolk County Department of Social Services in order to receive Medicaid benefits he otherwise would have been ineligible for.” District Attorney Sini said. “The defendant is accused of reporting a lower income to DSS in a scheme to line his pockets with taxpayer funds he didn’t need and wasn’t entitled to.”
Between December 1, 2009 and September 30, 2017, the defendant was allegedly receiving Medicaid benefits from the Suffolk County Department of Social Services (SCDSS). The defendant Mohammad Iqbal received Medicaid Benefits based on the yearly recertification forms allegedly completed and submitted by the defendant.
In the yearly recertification forms, the defendant allegedly reported that he made a lower monthly income than he actually had. The decision to continually provide the defendant with Medicaid benefits was based on the income representations allegedly made by the defendant.
An investigation conducted by the Suffolk County District Attorney’s Office and the Suffolk County Department of Social Services revealed that the defendant allegedly did not disclose his true household income to SCDSS.
Analysis of several undisclosed bank accounts allegedly associated with the defendant revealed that between 2009 and 2017 there was roughly $1.9 million dollars of income which was never reported to SCDSS. The majority of the income came from the defendant’s taxi cab company, Moe’s Taxi Ride, Inc.
Mohammad Iqbal, 53, of Coram, is charged with Welfare Fraud in the 2nd Degree, a Class C Felony. He was arraigned on the felony complaint today in front of Judge Stephen Braslow and is due back in court on November 19. Bail was set at $150,000.00 cash and $300,000 Bond.
If convicted, Mohammad Iqbal faces a maximum sentence of seven and a half to 15 years in prison.
This case is being prosecuted by Assistant District Attorney Tara Fairgrieve of the Financial Investigations and Money Laundering Bureau.
A criminal charge is an accusation. A defendant is presumed innocent until and unless proven guilty.