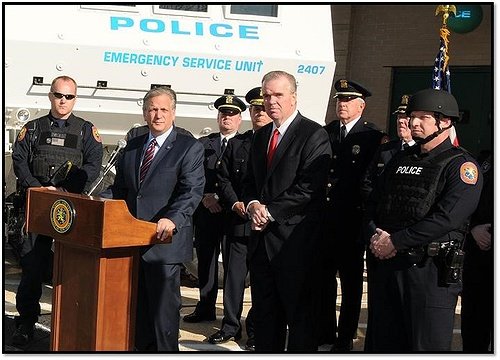 Nassau County, NY - November 16, 2015 - Due to acts of terror abroad, Nassau County Executive Edward P. Mangano and Acting Police Commissioner Thomas Krumpter today announced that the Nassau County Police Department intensified police patrols countywide over the weekend, with a special focus on large public gatherings, and will continue to keep an increased police presence in Nassau County for the time being. To assist law enforcement agencies, residents are reminded of the importance of the “See Something, Say Something” campaign.

“The Nassau County Police Department continues to work with local, state and federal law enforcement agencies to ensure the safety of our residents,” said County Executive Mangano. "Residents should remain vigilant in the fight against terrorism and work collectively with police to root out those that seek to cause harm to our nation.”

Acting Police Commissioner Krumpter stated, “Our law enforcement professionals have been in constant contact with the Joint Terrorism Task Force and at this time there is no known Nexis to the United States or to Nassau County. Rest assured that the Nassau County Police Department is always monitoring worldwide intelligence for any possible threats.”

In these dangerous times, it is critical that residents be aware of their surroundings while continuing with their daily routine. Residents can help be the eyes and ears of the police department by participating in the ‘See Something, Say Something’ campaign. Residents should not assume a package, bag or box was left somewhere by accident. If you see an unattended package, at or outside of a train station, bus stop, house of worship, mall or high traffic area – or if you see anything suspicious - report it to police by dialing 911. In addition, do not accept packages from strangers, when in buildings learn where all emergency exits are located, learn how to evacuate a building and know where the stairs are located.

Remember dial 911 – for any suspicious activity.