First-year student Sophia Powless speaks about her Native American heritage, her love of volleyball and passion for the environment. 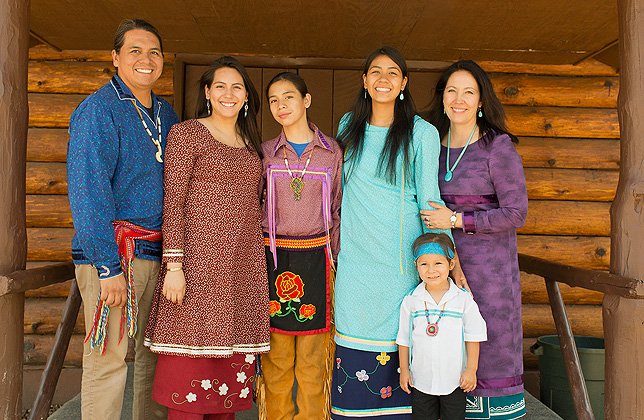 Garden City, NY - November 14, 2017 - In honor of November being National Native American Heritage Month, Adelphi University is highlighting first-year student athlete Sophia Powless - who is Onondaga, part of Haudenosaunee Confederacy based in Upstate New York near Syracuse, and an award-winning volleyball player whose upbringing and culture nurtured her passion for environmentalism.
For Powless, whose full greeting is “Nya weñha Skä noñh hothahyoñnίh ne’ nowa’wage’seye deñh gaiye' wagoñhsegéh Gañendawaks oñgyastha” (I thankful you are well, wolf clan is my clan, I am of the Longhouse, she shakes the hemlocks is my name), her identity as a Native American and as an Onondaga has shaped her into the dedicated and driven student she is today.
“I was raised on the Onondaga Nation my entire life, I was born at home on the nation,” explained Powless, who attended a school called Onondaga Nation from Pre-Kindergarten to eighth grade with nine other students in her class, which were all her cousins. “Culture is definitely always enforced in our whole community, we are all very close. It’s a very family orientated community.”
One of the activities Powless became involved in within the Haudenosaunee community is volleyball. For Powless, the sport is a family affair with her older sister and mother, Elaina and  JoAnne, respectively, playing volleyball and inspiring Powless to get into the sport. Soon after, Powless became involved in club volleyball for VolleyFX out of Rochester, New York, after her younger brother, Haeñhyanoñhna, became involved.
Powless also played for her high school team, the Lafeyette Lancers volleyball team, where she racked up an impressive list of honors including being named a three-time All State honoree, a National Honor Society member and graduated eighth in her class. Powless was then offered a spot to play volleyball at Adelphi, which she accepted.
“I have a lot of energy as it is, I’ve always been a very optimistic and energetic person so volleyball is just a great way for me to let it out,” said Powless. “I love everything about it. I love the atmosphere, I love the feeling it gives me everytime I’m around it. I feel like I was always involved with a lot of sports, but I’m more drawn to volleyball.”
In addition to her passion for volleyball, Powless is also committed to helping the environment through her studies of Environmental Science at Adelphi - something that has been instilled in her from a young age growing up on the nation.
“I’m in environmental studies, that’s always been a really big focus for me because when we were younger we were always taught to appreciate Mother Earth and to give back and how we have to take care of her,” said Powless.
It wasn’t just her upbringing and culture that inspired Powless’ interest in environmental science. While in high school, she was offered the opportunity to travel to Phoenix, Arizona for the American Indian Science & Engineering Society (AISES) National Conference - the premier event for American Indian science, technology, engineering and math (STEM) students and professionals. There, she was inspired by hearing the talks and stories of Native American scientists in the environmental science field.
“During the conference they talked about environmental issues and the various scenarios that we could do to help solve them, I think hearing those talks really sparked my interest in the environmental science field,” said Powless. “Overall the conference was an amazing experience, being surrounded by Native American scientists and hearing their stories was absolutely inspiring. I believe that after that whole conference I knew that I wanted to be a part of that.”
Powless also shared one of the reasons she chose Adelphi over schools she was originally looking at in Vermont, New Hampshire and Colorado - Adelphi’s No Impact Week, a series of events held on campus allowing the community to experience how lower impact living can benefit the planet, the people and the individual. The events were inspired by the AU Community Reads selection No Impact Man by Colin Beavan, which is a required reading for all first-year students.
“I do want to make a change, I want to make a difference,” said Powless when asked about what she plans on doing after graduation. “I want to help in some way whether it’s trying to get the point across how important environmental issues are or it’s me actually going out into the field, which is what I’m leaning towards. I want to be able to get a hands on experience and try to make an impact.”
About Adelphi: A modern metropolitan university with a personalized approach to higher learning.
Adelphi University is a highly awarded, nationally ranked, powerfully connected doctoral research university offering exceptional liberal arts and sciences programs and professional training with particular strength in its Core Four—Arts and Humanities, STEM and Social Sciences, Business and Education Professions, and Health and Wellness. Adelphi is dedicated to transforming students’ lives through small classes, hands-on learning and innovative ways to support student success.
Founded in Brooklyn in 1896, Adelphi is Long Island’s oldest private coeducational university. Today Adelphi serves over 7,900 students at its beautiful main campus in Garden City, New York—just 23 miles from New York City’s cultural and internship opportunities—and at dynamic learning hubs in Manhattan, the Hudson Valley and Suffolk County, and online.
More than 100,000 Adelphi graduates have gained the skills to thrive professionally as active, caring citizens, making their mark on the University, their communities and the world beyond.