DEC is encouraging all hunters across the state to pass up shots at young, small-antlered bucks. 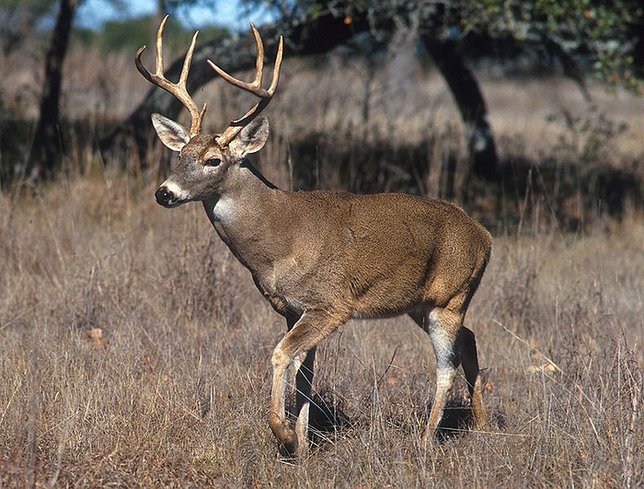 Hunters encouraged to pass up shots on young bucks as the Regular Firearm Season in the Southern Zone begins on November 19.

Albany, NY - November 14, 2016 - With the start of New York's most popular big game seasons just days away, New York State Department of Environmental Conservation (DEC) Commissioner Basil Seggos is encouraging hunters to be safe, enjoy the beauty of the outdoors, and consider passing up shots on young bucks.

"Regulated hunting of deer and bear is one of the most important conservation efforts needed to implement DEC's science based management strategies each year, and the opening of the regular season is a cherished tradition for many New Yorkers," Commissioner Seggos said. "New York's deer and bear populations are great resources that provide more than nine million pounds of quality, locally grown, organic meat to families across the state and I wish all hunters a safe and successful season."

DEC is encouraging all hunters across the state to pass up shots at young, small-antlered bucks. In a multi-year study conducted with Cornell University, more than 7,000 hunters surveyed across the state reported wanting more opportunities for taking mature bucks without mandatory restrictions on antler size. DEC has been working with several leading sportsmen's groups across the state to educate hunters on their role in deer management, the impacts of harvest choices, and changes in the deer population as more and more hunters voluntarily refrain from taking young bucks.

"Many hunters have told DEC that they would like to see more older bucks, and hunters can make a difference in the future of the sport by passing up young bucks," added Commissioner Seggos.

Many hunters are already voluntarily passing up young bucks, and the proportion of older bucks available in the herd has increased substantially in the past decade. As more hunters choose to pass young bucks, all hunters will enjoy the opportunity to see and take larger, older bucks.

Following the regular deer and bear seasons in the Southern Zone, late bowhunting and muzzleloading seasons will run from Dec. 12 through Dec. 20. Hunters taking part in these special seasons must possess a hunting license and either bowhunting or muzzleloading privileges.

In the Northern Zone, the regular deer and bear hunting season opened Oct. 22, and will close at sunset on Dec. 4. The Northern Zone includes the Adirondacks, Tug Hill Plateau, Eastern Lake Ontario Plain, and the Champlain and St. Lawrence valleys. A late bowhunting and muzzleloading season for deer will be open in portions of the Northern Zone from Dec. 5 to Dec. 11.

Though new cases of Chronic Wasting Disease (CWD) have not been found in New York deer since 2005, DEC continues to take the threat of CWD seriously. Hunters should, too. CWD is fatal to deer. If introduced, CWD could spread rapidly and be practically impossible to eliminate from the wild deer herd once established. Preventing CWD from entering New York is the most effective disease management strategy. Hunters can help protect New York's deer herd from CWD by following these tips:

Report Your Harvest - Be Part of Game Management

Hunter contributions to deer and bear management don't end when an animal is harvested. Successful hunters are required to report their harvest of deer and bear within seven days. However, DEC data suggest that less than half of successful deer hunters actually report. Failure to report is a violation of the Environmental Conservation Law, and it reduces the data DEC uses to manage deer and bear populations. Hunters may report via DEC's online game harvest reporting system or by calling the toll-free automated reporting system at 1-866-GAME-RPT (1-866-426-3778).

Other Reminders for the 2016 Southern Zone Regular Hunting Season

For specific descriptions of regulations and open areas, hunters should refer to the 2016-2017 Hunting and Trapping Regulations Guide available on DEC's website. Hunters are urged to review all regulations and safety tips contained in the guide. Hunters may also be interested to read DEC's booklet, Hunting the Black Bear in New York (PDF, 763 KB), or to review DEC's unit-by-unit Deer Hunting Forecasts, which are both available online.