Bay Street Theater & Sag Harbor Center for the Arts is pleased to announce a Holiday Party & Sing-along on Monday, December 21 at 7 pm. 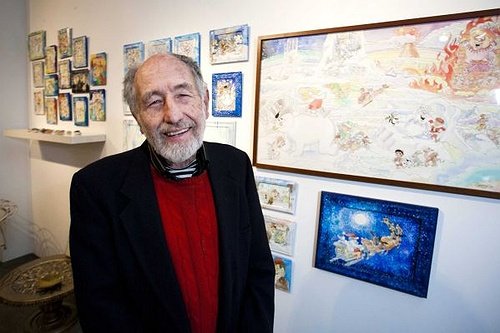 Sag Harbor, NY - November 13, 2015 - Bay Street Theater & Sag Harbor Center for the Arts is pleased to announce a Holiday Party & Sing-along on Monday, December 21 at  7 pm. Tickets are available online, or by calling the Bay Street Theater Box Office at 631-725-9500. The Box Office is open Tuesday through Saturday, 11 am to 5 pm or show time.

The Holiday Party & Sing-along  begins with a short chat with Don Duga, the creator of “Frosty the Snowman.” Don will then offer a demonstration of his craft and attendees can purchase caricatures in which he will draw your family into a scene from “Frosty.” The Sing-along will be led by Rick Unterberg, a pianist who plays regularly at Town House.

Best known for his creation of the famous “Frosty the Snowman” character, Don Duga, was part of a team of animators at Rankin, Bass Agency in New York City who helped to create “Frosty,” which led to many TV movies, and books. He also collaborated on other well-known animation films, including “Mad Monster Party” with Phyllis Diller and Boris Karloff, “The Last Unicorn” with Mia Farrow, as well as “The Last Drummer Boy,” “Smokey the Bear,” “Mr. Magoo,” and “Rudolph the Red-Nosed Reindeer.” Duga also helped to create the “Jackson Five” TV Show, and “Saturday Night Live” with the Coneheads. Over the years, Duga has branched out in other directions, such as his more recent paintings of The Beatles’ era. He also became friends with Albert Maysles, famous New York City filmmaker, who documented the first arrival of The Beatles at Kennedy Airport in 1964, with his late brother, David Maysles. The brothers jumped in the car and followed The Beatles to The Ed Sullivan Show, which they also included in their first film, “Meet The Beatles.” Listening to the stories of Albert Maysles, Duga captured their images in his wonderful, whimsical paintings of The Beatles. Another result is his paintings of the famous Grey Gardens mansion in East Hampton, which was the subject of the 1976 documentary film by the Maysles Brothers, called, “Grey Gardens.” It was owned and inhabited by the eccentric and colorful cousins of Jackie Kennedy, and Duga captured this in his art as well. Bay Street Theater produced GREY GARDENS the musical this past August as part of the 2015 Mainstage Season.

Rick Unterberg performs at The Townhouse regularly, beginning with opening night over twenty years ago. A conservatory-trained musician, Rick has been profiled in the Village Voice and is called "the best piano man in town" in Zagat's Night Life Guide. He received the prestigious Bistro Award from Backstage Magazine for outstanding achievement as a piano bar entertainer. September 13, 2008 was proclaimed "Rick Unterberg Appreciation Day" in the Borough of Manhattan by Borough President Scott Stringer. Rick also received a City Council Citation for professional achievement. Rick was incredibly honored and humbled by these accolades, but considers getting to know his regulars around the piano his greatest reward. For him, The Townhouse is home, and its audience is his extended family.