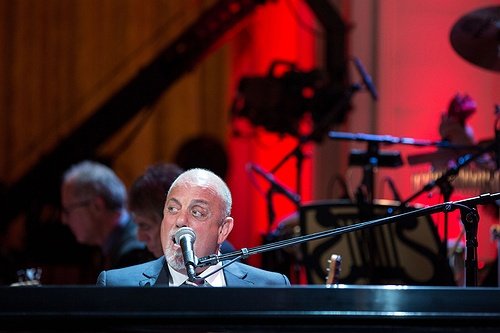 Photo by: Courtesy of White House Photo by Pete Souza.

Long Island, NY - November 14, 2014 - “Billy Joel: The Library of Congress Gershwin Prize” is a PBS music special honoring singer-songwriter Billy Joel’s receipt of the Library of Congress Gershwin Prize for Popular Song. The evening will feature Joel, as well as Tony Bennett, Boyz II Men, Gavin DeGraw, Josh Groban, Natalie Maines, John Mellencamp and LeAnn Rimes, with a special performance by Kevin Spacey — as well as a dance ensemble performance from Twyla Tharp’s “Movin’ Out.” (Program subject to change.) During the event, Joel will be presented the Gershwin Prize by U.S. Supreme Court Justice Sonia Sotomayor, U.S. Senator Patrick Leahy (D-VT), U.S. Representative Candice Miller (R-MI10), U.S. Representative Nancy Pelosi (D-CA12), U.S. Representative Gregg Harper (R-MS3) and Dr. James H. Billington, the Librarian of Congress. The award ceremony will be taped on November 19, 2014 at the Daughters of the American Revolution (DAR) Constitution Hall. The program will premiere Friday, January 2, 2015 at 9 p.m. ET on PBS stations nationwide, as part of PBS Arts. (Check local listings.) The program will also be broadcast at a later date via the American Forces Network to American service men and women and civilians at U.S. Department of Defense locations around the world.

The Library of Congress Gershwin Prize for Popular Song is named in honor of the legendary George and Ira Gershwin. This award recognizes the profound and positive effect of popular music on the world’s culture. The prize is given annually to a composer or performer whose lifetime contributions exemplify the standard of excellence associated with the Gershwins. The Gershwin Prize was first awarded to Paul Simon in May 2007, followed by Stevie Wonder in February 2009, Sir Paul McCartney in June 2010, the songwriting team of Burt Bacharach and Hal David in May 2012, and to Carole King in 2013.

Billy Joel ranks as one of the most popular recording artists and respected entertainers in the world. His piano-fueled narratives take listeners into the relatable and deeply personal crevices of life, mirroring his own goal of writing songs that “meant something during the time in which I lived . . . and transcended that time.” His songs “Scenes From an Italian  Restaurant,” “The Entertainer,” “Piano Man,” “Big Shot,” “New York State of Mind,” “You May Be Right,” “It’s Still Rock and Roll to Me,” “Allentown,” “Uptown Girl” and “The Downeaster ‘Alexa’” are among many classics in a rich and deep catalog of music that have acted as personal and cultural touchstones for millions of people.

“WETA is proud to bring this concert to the American people in collaboration with the Library of Congress,” noted Sharon Percy Rockefeller, president and CEO of WETA. “It is our continuing honor to share these special musical events with the wide public television viewing audience.”

“As Beverly Sills once said, the arts are a signature of our civilization. PBS and our member stations are committed to using our media platforms to bring the best of American arts and culture to our audiences,” said Paula A. Kerger, president and CEO of PBS. “Billy Joel is the voice of a generation with his music. Honoring and recognizing his contribution to music under the PBS Arts banner is just one way that we can help share our collective cultural legacy with all Americans.”

“Through public media that informs, educates, inspires and entertains, we are pleased to support the Library of Congress Gershwin Prize and this celebration of the enduring musical contributions of Billy Joel to our country’s musical heritage,” said Patricia Harrison, president and CEO of the Corporation for Public Broadcasting.

“Billy Joel’s array of work reflects the spirit of the Gershwin Prize with its originality, longevity and diversity of appeal,” commented Dr. James H. Billington, the Librarian of Congress. “Since the start of the Library of Congress Gershwin Prize for Popular Song, PBS has brought this celebration of creativity directly and more broadly to the American people. We’re pleased that the greater public will be able to join in the recognition of this great artist.”

A native of Long Island, New York, Joel has had 33 Top 40 hits and 23 GRAMMY Award nominations since signing his first solo recording contract in 1972. In 1990, he was presented with a GRAMMY Legend Award. Inducted into the Songwriters Hall of Fame in 1992, Joel was presented with the Johnny Mercer Award, the organization’s highest honor, in 2001. In 1999 he was inducted into the Rock & Roll Hall of Fame, and has received the Recording Industry Association of America Diamond Award, presented for albums that have sold more than 10 million copies. In 2010, Joel released the documentary The Last Play at Shea, about the intersecting histories of a city, a team and a music legend, charting both the ups and downs of the New York Mets and the life and career of Joel, who was the last performer to play Shea Stadium before its demolition in 2008. In 2013, Joel received the 36th Annual Kennedy Center Honor.

Joel has donated his time and resources to a variety of charitable causes outside the realm of his musical career. New York’s quintessential son, Bill Joel performed six songs at the historical “12.12.12 The Concert for Sandy Relief,” joining other music greats to raise awareness and money to help those affected by Hurricane Sandy. The show, which included tributes to first responders and those affected by the storm, was broadcast to an estimated 2 billion viewers and raised $32 million in funds before anyone took the stage. Additionally, as a longtime advocate for music education, he first began holding “master class” sessions on college campuses more than 20 years ago, giving sessions at colleges across the country and around the world. In addition, he has held classes as a benefit for the STAR Foundation (Standing for Truth About Radiation) and to establish the Rosalind Joel Scholarship for the Performing Arts at City College in New York City. For his accomplishments as a musician and as a humanitarian, Billy Joel was honored as the 2002 MusiCares Person Of The Year by the MusiCares Foundation and the National Academy of Recording Arts & Sciences.

“Movin’ Out,” a Broadway musical based on Joel’s music, choreographed and directed by Twyla Tharp, was nominated for 10 Tony Awards and took home two including Best Orchestrations — Joel’s first Tony Award win — and Best Choreography. Additionally, Joel has earned three Awards For Cable Excellence and has received numerous ASCAP and BMI awards including the ASCAP Founders Award and the BMI Career Achievement Award and, in 1994, was given the Billboard Century Award. Among his many other awards and honors, Billy Joel has been given a Doctor of Humane Letters from Fairfield University (1991), a Honorary Doctorate from Berklee College of Music (1993), and a Honorary Doctorate of Humane Letters from Hofstra University (1997) and a Doctor of Music from Southampton College.

WETA Washington, D.C., is one of the largest producing stations of new content for public television in the United States. Other WETA productions and co-productions include “PBS NewsHour,” “Washington Week with Gwen Ifill,” “The Kennedy Center Mark Twain Prize,” “In Performance at the White House” and documentaries by filmmaker Ken Burns, including the upcoming six-hour series “Cancer: The Emperor of All Maladies,” premiering March 30-April 1, 2015. More information on WETA and its programs and services is available at the website. On social media, visit them on Facebook or follow @WETAtvfm on Twitter.

Bounce AEG is an award-winning broadcast production division of The Anschutz Entertainment Group, the world’s leading sports and entertainment company. In addition to this year’s production of “The Library of Congress Gershwin Prize,” Bounce AEG has produced one-of-a-kind live events including the annual “Musicares Person of the Year” special during GRAMMY Week, “The National Christmas Tree Lighting” and several episodes of the acclaimed PBS series, “In Performance at the White House.” The Bounce team also specializes in brand integration and marketing — working with high-end luxury firms on launching and maintaining their overall brand status. Tim Swift is founder and CEO. More information about Bounce AEG is available at the website.

The Library of Congress sponsors privately endowed programs that honor achievement in the humanities and creativity. Through these awards and prizes, the world’s greatest repository of human creativity honors those who have advanced and embodied the ideals of individual creativity, conviction, dedication, scholarship and exuberance. More information is available at the website.

PBS, with its 356 member stations, offers all Americans — from every walk of life — the opportunity to explore new ideas and new worlds through television and online content. Each month, PBS reaches more than 124 million people on-air and online, inviting them to experience the worlds of science, history, nature and public affairs; hear diverse viewpoints; and take front row seats to world-class drama and performances. PBS’ broad array of programs has been consistently honored by the industry’s most coveted award competitions. Teachers of children from pre-K through 12th grade turn to PBS for digital content and services that help bring classroom lessons to life. PBS’ premier children’s TV programming and Web site, pbskids.org, are parents’ and teachers’ most trusted partners in inspiring and nurturing curiosity and love of learning in children. More information about PBS is available at www.pbs.org, one of the leading dot-org Web sites on the Internet.

The Corporation for Public Broadcasting (CPB), a private, nonprofit corporation created by Congress in 1967, is the steward of the federal government’s investment in public broadcasting. It helps support the operations of more than 1,400 locally-owned and -operated public television and radio stations nationwide, and is the largest single source of funding for research, technology, and program development for public radio, television and related online services. More information about CPB is available at the website.

Pictured: Billy Joel performs during a concert honoring singer-songwriter Carole King in the East Room of the White House, May 22, 2013. President Barack Obama presented King with the 2013 Library of Congress Gershwin Prize for Popular Song during the event, which was part of the “In Performance at the White House” series.