The DEC has found and charged four young men who captured two young deer and posted images of the crime to Instagram. 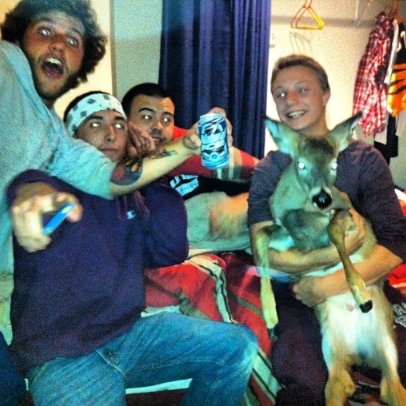 Four young men are facing charges after environmental conservation officers (ECOs) linked them to a case of illegal wildlife capture. The group was found out after an anonymous tipster forwarded the New York State Department of Environmental Conservation two images of them holding a young whitetail deer inside a residence on Long Island.

One of the men—18-year-old George Salzman of Calverton—was shown holding a stressed deer off the ground in both pictures, which were originally posted to the photo-sharing website Instagram. Security footage (shown below) was also obtained by the NYSDEC showing one of the fauns inside the Salzmann household.

On November 1st, a day after receiving the photos, several ECOs found Salzmann with three friends inside a Calverton business and questioned them about the incident. Once presented with evidence proving he has captured a live deer, Salzmann admitted he had caught two fawns, the first of which was taken along Grumman Boulevard.

Subsequent interviews revealed that Salzmann’s three friends—Conor Lingerfelt, 19, of Jamesport, Joseph Sacchitello, 20, of Riverhead, and Anthony Infantolino, 20, of Wading River—were all involved in the capture of the second deer. The group pursued the fawn in a vehicle along a stretch of fence on Hulse Landing Road out of thrill, grabbing it and taking the frightened animal back to one of their homes.

Tickets were issued for the illegal take and pursuit of protected wildlife, as well as for failure to tag a six point buck head which was also found in Salzman’s house. The group could be fined up to $1700, and is due to appear at the Town of Riverhead Justice Court on November 27.

“The pursuit and capture of native wildlife is not tolerated in New York State,” said DEC Regional Director Peter A. Scully. “Although these young men may have thought their actions were harmless and trivial, serious consequences can occur due to these types of actions. Wildlife can be dangerous and unpredictable, and DEC's environmental conservation offices deserve recognition for their successful pursuit of this case.”

Although deer hunting is allowed under strict regulation in Suffolk County, the pursuit and capture of any fauna is illegal without appropriate permits. All native species of wildlife are protected under state law and the DEC cautions that the capture of animals can have serious consequences. Stress and injury can occur in the animal, and it is entirely possible for diseases to be spread from wildlife to people who come in direct contact; deer in particular are known to contract Lyme disease after being bitten by the ticks which carry it.

According to statements made by the young men, both deer were released back into the wild unharmed. ECOs ask anyone who spots illegal activities involving wildlife to call them at (631) 444-0250 during regular business hours, or at 1-877-457-5680 or 1-800-TIPP-DEC during any other time of day.