Four men were arrested for stealing from a clothing donation bin outside a Nassau Mall on Tuesday, November 12. 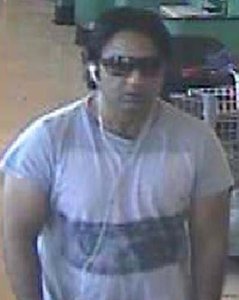 At approximately 4:40 AM, officers observed Seventh Precinct Officers observed 19 –year-old Juan A. Zarzuela of Amityville, 18-year-old Josue Rivera and Edenilson Rivera of Lindenhurst, and 23-year-old Julio Cesar-Erazo-Gonzalez (whose address is unknown) removing clothing from a donation bin located in the parking lot of the Sunrise Mall.

The four young men put the stolen clothing into a Dodge van and attempted to leave the lot when officers stopped them, and placed the group under arrest. All four have been charged with Grand Larceny in the fourth degree; Zarzuela and Josue Rivera were also charged with Possession of Burglar Tools. An arraignment was scheduled for today at the First District Court in Hempstead.

In an unrelated incident, the Nassau County Police Department is now seeking the public’s help in finding a Grand Larceny suspect in connection to a theft which took place on April 26 of this year. The subject, pictured above, stole a Bank of America debit card from the Stop & Shop grocery store at 177 Forest Avenue in Glen Cove, then made several purchases on the card at the same store. He then left the location by unknown means.