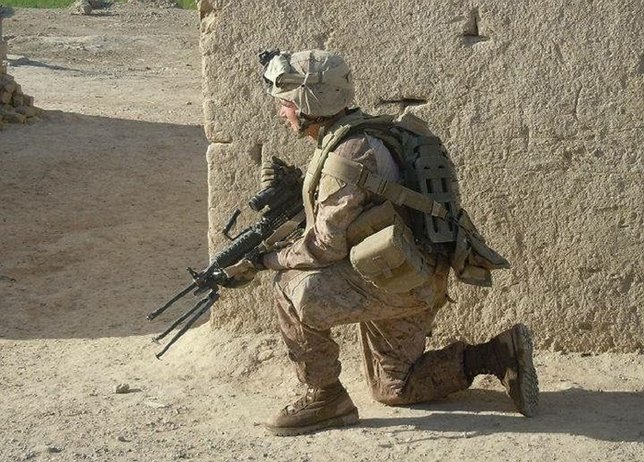 Pictured is Ex-Corporal Dustin Whitton on patrol in Afghanistan.

Bohemia, NY - November 11, 2016 - In 2010, Dustin Whitton left his home in Bohemia to serve as a rifleman in the U.S. Marine Corps. He was deployed to Afghanistan in 2011 and after four years of service to his nation, was honorably discharged as Lance Corporal. When he returned stateside in 2014, he drifted between jobs for nearly two years, first working at fast food restaurants and other thankless jobs before moving to the construction industry, where the early morning hours and manual labor were familiar.

However less familiar were the unsafe working conditions often faced at non-union construction sites and even having his work wages stolen by unscrupulous employer-contractors. He also learned from construction site co-workers that it was common for companies to hire new work crews every 11 months, simply for the company to avoid promised annual raises.

The lack of on-the-job safety and financial security convinced Ex-Corporal Whitton that he needed a better career path, leading to his decision to apply to Helmets to Hardhats, a national nonprofit that helps veterans make the transition from military to civilian life.

In July 2016, it led Dustin to the New York City-based Steamfitters Local 638. Here, workers undergo a five-year apprenticeship program, paid for by the union and Mechanical Contractors Association of New York, to learn how to design, install, and maintain what are effectively the hearts, lungs and arteries of the buildings that make New York so great. This includes fire sprinklers, steam and water piping, and heating and air conditioning (HVAC) systems in commercial, residential and industrial buildings throughout New York City, Suffolk and Nassau Counties.

Currently a first-year apprentice, Dustin is installing fire sprinklers at a public storage facility project in Hicksville, LI., earning quality wages, healthcare and pension protections to support his fiancé and their soon-to-be born daughter, who is expected in November.

“For the first time since I left the Marine Corps, I wake up in the morning and enjoy going to work. It has been an easy adjustment into a civilian job, and I know that at the end of the day, I am able to proudly support my growing family with this career.”

“The veterans who entered Steamfitters Local 638 via Helmets to Hardhats truly make a positive difference in our workforce. They bring in the skills and values they developed in the military and are rewarded with a quality career in the construction industry that pays good wages and benefits,” said Patrick Dolan, Steamfitters Local 638 President. “Steamfitters Local 638 proudly supports our veterans by investing in their education and teaching them how to safely build and maintain the iconic New York skyline.”