Ceremony held at Veterans Plaza at Huntington Town Hall to honor veterans of the Town of Huntington and across our Nation. 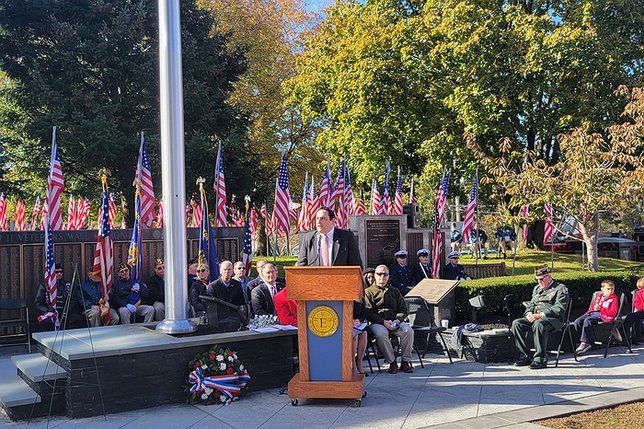 Town of Huntington Supervisor Chad. A Lupinacci, Deputy Supervisor Ed Smyth, Councilwoman Joan Cergol and Town Clerk Andrew Raia were joined by the Huntington Veterans Advisory Board, New York State and Suffolk County officials for a Veterans Day Ceremony on Veterans Plaza at Huntington Town Hall to honor veterans of the Town of Huntington and across our Nation.
“One hundred years ago, the Tomb of the Unknown Soldier was dedicated by the Army on Armistice Day, November 11th, 1921. The Tomb itself represents the service, sacrifice and unknown that awaits every soldier. Every serviceman and woman, every name on each of these memorials on Veterans Plaza, those living and those taken from us, the final resting place for any one of them could have been at the Tomb of the Unknown Soldier. Every year we honor our veterans and we speak of their bravery, service and sacrifice – but the risk for the reward of freedom is visualized at Arlington National Cemetery’s most iconic memorial. I am thankful for our veterans, their families, and to be here with you all, in this community that so deeply respects our veterans and our fallen soldiers,” said Supervisor Chad A. Lupinacci.
Joining Town officials were Councilman-elect Dr. Dave Bennardo, Councilman-elect Sal Ferro, and Superintendent of Highways-elect Andre Sorrentino. Attending from New York State were State Senator Mario Mattera, Assemblyman Steve Stern and Assemblyman Keith Brown. From Suffolk County, Comptroller John Kennedy, Legislator Tom Donnelly and Legislator-elect Stephanie Bontempi attended.
Veterans Day 2021 commemorates the centennial of the Tomb of the Unknown Soldier. Located at Arlington National Cemetery, the Tomb was initially dedicated by the Army on Armistice Day, November 11, 1921, with the burial of an unknown service member from World War I. Over the past century, additional unknowns have been buried at the Tomb, and the site has become a people’s memorial that inspires reflection on service, valor, sacrifice and mourning.
2021 also marks the 80th anniversary of the bombing on Pearl Harbor on December 7, 1941. Veterans Advisory Board member Mortimer Roberts, a World War II veteran, led the Pledge of Allegiance. The World War II Memorial on Veterans Plaza now displays 365 new names added at a special ceremony on October 3, 2021 after a years-long outreach effort to properly recognize all Huntington residents who served in World War II. The names on the memorial now total 6,365.
Veterans Advisory Board Chairman Bill Ober served as Master of Ceremonies and Veterans Advisory Board member Albert “Butch” Jensen served as Sergeant at Arms, who also led the presentation of colors by local veterans organizations’ Color Guards and the U.S. Coast Guard Eaton’s Neck Station Color Guard. Veterans organizations represented included Phil Rhoades, Commander, Disabled American Veterans Chapter 19; John Carvajal, Commander, Elwood/Commack VFW Post 9263; Gary Steinmueller, Commander, Nathan Hale VFW Post 1469; Donna Boyle, Commander, Greenlawn American Legion Post 1244; Andrew Brady, Commander, Huntington American Legion Post 360; Bruce Brenner, Commander, Combat Infantrymen’s Association; Harry Arlin, Commander, Jewish War Veterans Post 488; and Rocco Paduano, Commandant, Marine Corps League Huntington Detachment 792.
An invocation and benediction were delivered by Rev. Edward Sheridan from St. Anthony of Padua Church in East Northport. The ceremony featured patriotic music performed by Teri George, soloist from People’s United Bank Bayport Office, Tom Butterfield, who played Taps, and Brad Davidson led Amazing Grace with the Northport Pipe and Drum Band. A wreath was laid at the flag pole to honor all veterans. A rifle salute by members of the Elwood-Commack VFW Post 9263 was led by Commander John Carvajal.
Attendees included Mrs. Connie Mangano, Gold Star Mother of Sgt. First Class Anthony Mangano, who made the supreme sacrifice in the line of duty in Afghanistan in June 2008; Lou Pagano, head of the Huntington High School 50th Anniversary for Vietnam Veterans held on Veterans Plaza; Chief Dave Kaufman and members of the Huntington Community First Aid Squad; and members of the Sons of Italy, Perry Como Lodge in Northport.
The ceremony took place on Veterans Plaza amid the American flag display known as the “Field of Honor,” as well as a 30-foot American flag displayed between fire trucks from the Huntington Fire Department and Huntington Manor Fire Department. Refreshments donated by Buttercooky Bakery and Dunkin Donuts were served after the ceremony. South Huntington Cub Scout Pack 406 volunteers will be assisting with program distribution.
The Kiwanis Club of Huntington is sponsoring a “Field of Honor” of American flags on display at Huntington Town Hall. 3’x5’ American flags are mounted on 8’ poles surrounding Veterans Plaza on the front lawn of Huntington Town Hall. Each flag has its own custom-printed gold ribbon personalized and dedicated to each veteran honoree. Flags can be purchased at BuyAFlag.org for $35. Flags were assembled in early September 2021 and will be taken down in December 2021. Net proceeds benefit veterans’ and children’s causes in Huntington.