With the holiday shopping season upon us, Nassau County Executive Edward P. Mangano and County Clerk Maureen O’Connell today joined with Julie Marchesella, President of the Nassau Council of Chambers of Commerce, and small business ... 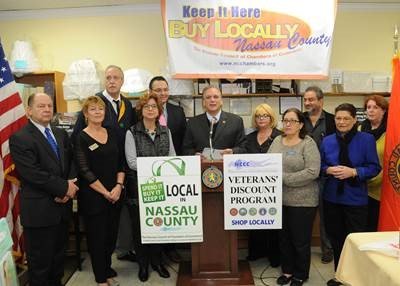 “I encourage all residents to support their hometown businesses this holiday season, and year-round, as local businesses are the heartbeat of Nassau County’s economy and make our communities stronger and better places to live, work and raise a family,” said County Executive Mangano.

The Nassau County Industrial Development Agency, in partnership with the Nassau Council of Chambers of Commerce, launched a significant new marketing campaign aimed at encouraging residents to shop at local Nassau County merchants. Utilizing television, print, radio and social media the ads featured Nassau business owners. The campaign is part of the Nassau County IDA’s effort to assist small businesses as they are the lifeblood of our communities.

Small businesses play a critical role in our economy as they account for 98% of all businesses in New York State and employ more than 40% of the State's private sector workforce. The nation’s 28 million small businesses create nearly two out of three jobs nationwide and have generated over 65% of the net new jobs since 1995.

“With Nassau employers contributing to the economic base and connectivity of our local communities, we must help raise awareness about the role they play and promote a business-friendly Nassau that attracts suppliers and distributors in similar industries,” said County Executive Mangano.