Brendon F. Mueller, 24, was discovered with 4,000 Alprazolam pills in his vehicle at the time of his arrest, according to reports.

NCPD reports the arrest of Brendon F. Mueller of Oceanside, 24 for Criminal Possession of a Controlled Substance that occurred on Wednesday, November 8.

Oceanside, NY - November 9, 2017 - The Major Case Bureau reports the details of an arrest for Criminal Possession of a Controlled Substance that occurred on Wednesday, November 8, 2017 at 7:00 pm in Oceanside.
According to Narcotics Vice Squad Detectives, an investigation into a fatal overdose that occurred in Nassau County led to the arrest of defendant Brendon F. Mueller, 24, of Oceanside. On Wednesday, November 8, 2017 the defendant did knowingly and intentionally possess with the intent to sell Alprazolam pills to another. 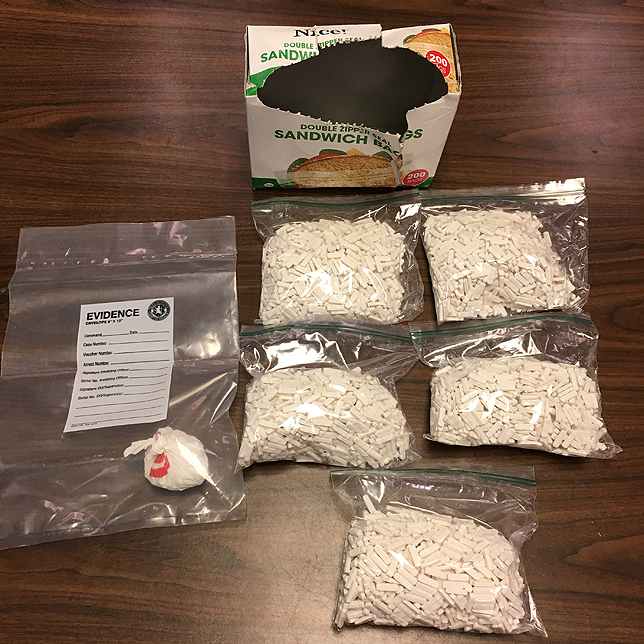 Detectives recovered 4000 Alprazolam pills inside the defendant Brendon F. Mueller's vehicle. Photo Credit: NCPD
Defendant Mueller was placed under arrest on the same day at 7:00 pm on Atlantic Avenue in Oceanside. Subsequent to the arrest, detectives recovered 4000 Alprazolam pills inside the defendant’s vehicle (a 2013 Volkswagen GTI).
Defendant Mueller is being charged with 2 counts of Criminal Possession of a Controlled Substance 3rd Degree and Criminal Sale of a Controlled Substance 3rd Degree. He will be arraigned on Thursday, November 09, 2017 at First District Court, Hempstead.
A criminal charge is an accusation. A defendant is presumed innocent until and unless proven guilty.